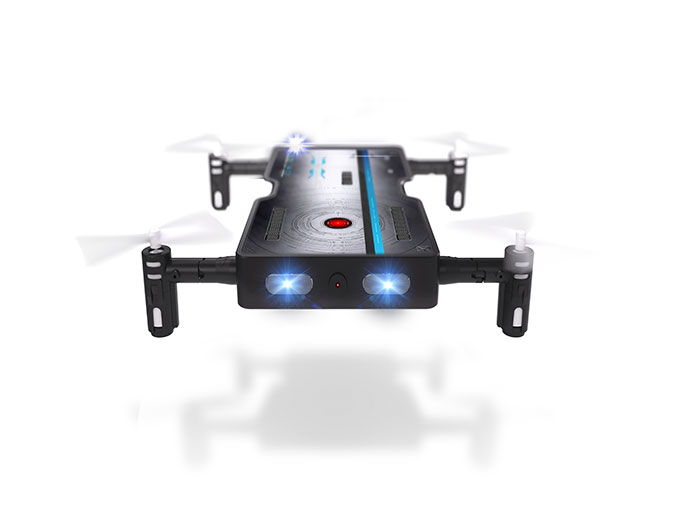 From VR compatibility to gaming features, drones are changing quickly—and tech toycos are competing for a piece of the action.

Four months ago, on a warm March day in Dubai, 15-year-old Luke Bannister’s flying machine breezed through the finish line at the inaugural World Drone Prix. The British teen, who nabbed US$250,000 in prize money, bested 150 other teams in a competition that embodied just how important the world of drones is becoming for young people. Whether at a global race track or the local park, the sky is being swarmed by drones—or technically speaking, unmanned aerial vehicles (UAVs)—that are attracting kids with their VR compatibility, gaming features and teeny-tiny incarnations.

And the market for consumer drones is only in take-off mode. According to a June 2016 BI Intelligence report, drone sales are set to exceed US$12 billion by 2021. Consumer drone shipments are expected to more than quadruple over the next five years, thanks to competitive pricing and innovative tech that speaks to beginners. As for the near future, the US Toy Industry Association listed drones and flying quadcopters among the top toy trends of 2016.

“I believe kids will soon be getting drone licenses in a way that’s not unlike going to the DMV to get a driver’s license.”

“There are drones being built for every age, from mini ones for two-year-olds that lift up like spinning tops, to full drones for teens with cameras—and everything in between,” says Living in Digital Times founder Robin Raskin, who creates conferences and events for the tech community. “We’re on the cusp of this. We’ve only begun to see how imaginative people are going to be. Soon, more drones in areas of entertainment, travel, science and education will take hold of the market. Imagine kids going on a field trip and looking at the topography of a place from above.”

Raskin believes a sweet spot exists in the kids market since toy drones typically weigh under half a pound, which is the maximum weight allowance before a drone is required to be registered with the US Federal Aviation Administration. (Laws to that effect were enacted in December 2015.) So while the US government is instituting regulations around their weight and altitude (drones are restricted from flying higher than 400 feet), drone flying standards are still a bit up in the air. But that may change.

“I believe kids will soon be getting drone licenses in a way that’s not unlike going to the DMV to get a driver’s license. You can hurt someone with a drone. There are legal liability issues involved if you hit someone,” says Raskin. “Every business is looking at drone delivery, so there will be a million of them moving around soon. In order to have a generation of safe droning, being licensed is a skill kids will need, like typing and driving.”

While global drone market leader DJI is opening retail stores in Asia, the proliferation of drones is also being propelled by inexpensive products coming from companies like Miami-based Odyssey Toys, which makes flying quadcopters that retail for as low as US$29 apiece.

Among the toyco’s newest products is the Pocket Drone, which debuted earlier this year and began shipping to Sharper Image and Brookstone stores in May (SRP US$129.95). True to its name, the drone’s motorized arms can be folded up so that the device fits inside a pocket—even ones owned by tweens—and features a 1280×720-pixel HD camera that films footage on a memory card within the device that can then be transferred to a phone using a microSD card.

With a CE Week Best in Show Award already to its name, the Pocket Drone is part of Odyssey’s business plan to churn out drones with standout characteristics that set them apart from the competition—a strategy which led the company to triple its business last year.

“If it’s not unique, we don’t want to do it. It has to have a sizzle factor,” says Odyssey Toys president Sal Irigoyen, who founded the company in 2003 following a stint in the consumer electronics sector. His experience straddling toys and electronics is something a drone knows all too well, as the industry continues trying to figure out which category the flying device really belongs in.

“There’s a humongous misunderstanding of what a drone should or could be. Most stores divide toys from electronics by price-point. Everyone thinks something that flies is a drone, but a drone is really something that has a camera,” Irigoyen says. “A lot of the features in more expensive drones are filtering down, so guys like me in the toy business can put them in ours.”

For example, the role of virtual reality within the drone world is on the cusp of going mainstream, and German lens manufacturer Zeiss has taken note. Last year, the company launched its VR One headset with a price tag of US$129. Now, Zeiss’s Multimedia Devices arm, in collaboration with Germany-based mobile developer Kai Aras, has launched the US$10 Cloudlight FPV app, which lets users view a live feed from either a DJI or Parrot drone’s camera using the VR One headset.

“It creates a fully immersive pilot experience, so you feel like you’re in the cockpit of a drone,” says Dave Hodgson, Zeiss Multimedia Devices director of sales and distribution for North America. The integration of VR speaks to a quickly growing drone racing market (FPV stands for first-person view), and Hodgson says Cloudlight is the first product to really offer a cross-pollination between the VR and drone worlds.

“VR is a very new category and there’s not a lot of content out there. Cloudlight gives people a legitimate reason to purchase a VR headset,” Hodgson says. “You can only watch a drone circle around so much. Piloting provides a whole new experience, and racing drones is becoming a large and accepted category as far as a sport goes.”

While the concept of VR integration generally skews older, Irigoyen believes the demand for it will become more widespread, which is why Odyssey Toys is launching a VR-compatible drone at the end of this summer. The company’s Starchaser drone, which comes with 3D virtual reality goggles, will sell for US$149.95, and its companion app will be available on Google Play and iTunes.

He also predicts more 360-degree viewing cameras will start appearing soon, which will let flyers turn their heads to see what’s behind them. But for now, drones that snap photos directly in front of people’s faces will do. Take, for example, the selfie-taking Hover Camera, which has landed Chinese parentco Zero Zero Robotics US$25 million in funding. The drone takes 4K videos and photos, and its wings are enclosed to ensure close-ups don’t lead to mark-ups.

“Everybody wants a selfie. So we’re working on something like that, too,” Irigoyen says.

Within this increasingly competitive drone market, Montreal-based robotics company WowWee saw untapped potential in niche gaming drones that are both well-priced and well-balanced. In September, the company behind the popular MiP and Robosapien brands will make its foray into the drone space.

WowWee’s US$79 Lumi indoor gaming self-stabilizing quadcopter lets users take off, land, navigate and perform aerial maneuvers using a companion app and proprietary BeaconSense navigation system. And through mobile games like Lumi to the Beat, kids can select a song stored on their phones and the drone will subsequently break into a dance-off.

“We are aware of the crowded drone space, and we only wanted to enter it if we could bring something unique to the table,” says WowWee brand manager Sydney Wiseman. “BeaconSense technology gives Lumi context as to where it is in space and in relation to other items. Remote-controlled drones are super-hard to fly and keep steady, and more expensive drones use an app and GPS chip to give them a sense of where they are that helps them self-stabilize. This is a low-cost solution to give drones a sense of where they are actually flying.”

And speaking of stability, Irigoyen believes the drone market has at least another two to three years of explosive growth ahead of it. “Kids are not getting sick of it, because there’s nothing cooler than flying,” he says. “We all have that desire.”