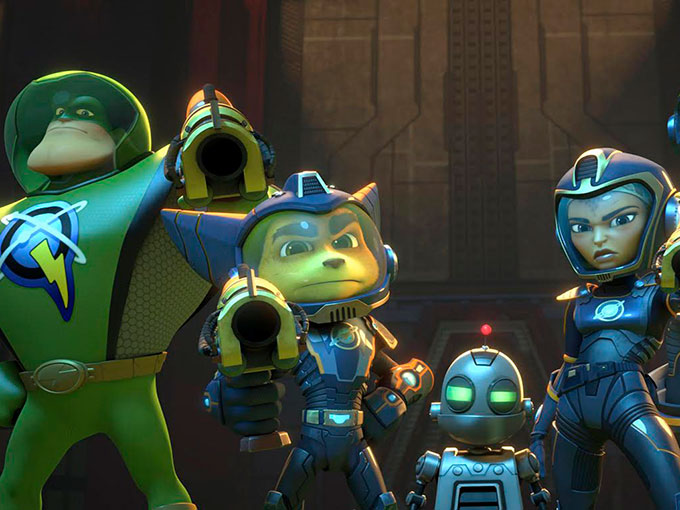 The big-screen video game adaptation is kicking off a new strategy for the Vancouver-based studio.

Co-produced with L.A.’s Blockade Entertainment, feature film Ratchet & Clank is based on the hit video game franchise of the same name published by Sony Entertainment America and developed by Insomniac Games. The film, which is being distributed by Gramercy Pictures in the US and Universal in Canada, opens wide across North America on April 29, just two weeks after the release of the newest Ratchet & Clank video game for Playstation.

The film will roll out internationally over the next two months.

“There’s been a big coordinated effort between Playstation globally and all of our international distribution partners to create synergy, co-branding and co-marketing…using the game and the film to capture and engage an audience and cut through a very crowded marketplace,” says Rainmaker president and chief creative officer Michael Hefferon, who executive produced the film. (Ratchet & Clank is produced by Rainmaker’s Kim Dent Wilder and Blockade’s Brad Foxhoven and David Wohl.)

Hefferon contends that while the average filmgoer may not recognize the Rainmaker brand, Ratchet & Clank is an established franchise─one that he hopes will draw both fans and families to the theater.

Rainmaker is ultimately looking to create an experience that will inspire continued engagement between all Ratchet & Clank properties, and the company partnered with Sony and Insomniac to ensure that the film and video game shared similar characteristics, all in an effort to give fans a seamless experience.

This “engagement factor” is key to Hefferon’s strategy for Rainmaker going forward. For its next project, the company has once again partnered with Blockade and Sony Computer Entertainment America to develop a feature based on the Playstation video game Sly Cooper.

“Everything that we’re looking to do ‘really’ is a 360-degree approach to engagement,” he says. “It’s not just [that Sly Cooper is] a franchise that people know; it’s also a way an audience can engage and become invested in the content.”

As for the upcoming release of Ratchet & Clank, Hefferon says the film has the potential to outperform other indie animated films like Canadian co-pro The Nut Job, which grossed US$64 million at the North American box office in 2014 without the benefit of an established fan base.