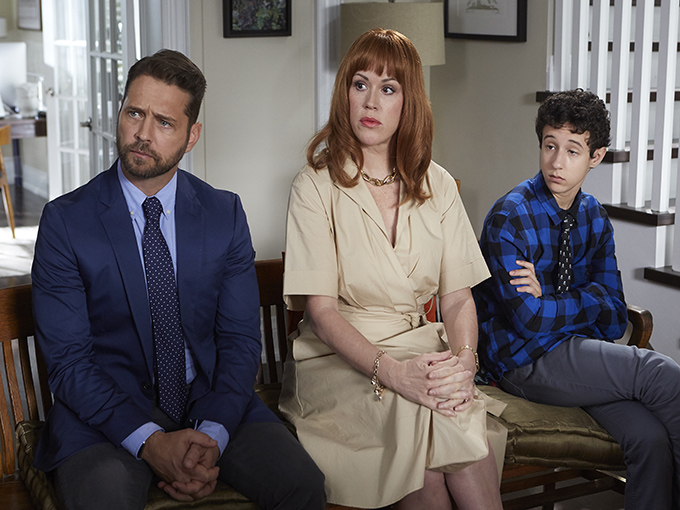 Set to bow in Canada on May 8 at 7:30 p.m. ET, and produced by Toronto’s Aircraft Pictures in association with Miami’s Dolphin Entertainment, Raising Expectations (formerly The Wonderful Wayneys) follows the misadventures of a married couple, played by GenXers Jason Priestley and Molly Ringwald, as they aim to raise five flawless children. Their youngest son Emmett (Simon Cadel), however, has a hard time living up to his parents’ and siblings’ expectations and becomes the focus of the 26 x half-hour series as he celebrates his relative mediocrity.

Saunders gives Kidscreen the scoop on his transition to writing for a kids and family audience for the first time and the differences between producing writer-driven shows in the US and Canada.

What was your inspiration for the series?
I wanted to tell a story that was very loosely based on a portion of my family, which is a family of nine. In other pilots that I’ve written, I like to dabble and draw from my family because we’re such a diverse bunch of characters. With Raising Expectations, I wasn’t thinking that I wanted to make a kids show. I wanted to make a show for a family, or a show that my family would want to watch. One that wouldn’t talk down to kids, but was something kids could enjoy. The show is from the youngest kid’s point of view, but it’s a show with adult issues, too. And it’s a show where the parents play as much of a role as any of the kids, as opposed to the conventional thinking where shows are made for 11- to 12-year-olds, and the parents are idiots and only serve as people who get in the way.

From a writing perspective, did you approach this series any differently from your other projects?
I’ve done a lot of shows and each one is extremely different in its culture, tone and sensibility. I was able to learn from the late Garry Shandling, Mitch Hurwitz of Arrested Development and Steve Levitan (Just Shoot Me!, Modern Family), so I had a chance to see what works and doesn’t work from my view. Raising Expectations was a great opportunity to apply everything I learned to a largely Canadian production, which was a little different from a US show in the way the writers were brought on. We had a writer’s room that started in L.A. with a very small staff of writers, which is what I prefer. Huge writing staffs, which I experienced on some of the shows I worked on, drive me a bit crazy. So some of those L.A. writers came with us to Toronto, where we shot the series.

How was the experience shooting in Canada different from a US production?
You can’t be as self-indulgent on a Canadian show, as we had a very short schedule. This was the biggest hurdle. On the first day, we immediately started writing an outline for the first episode, which wouldn’t normally happen on a typical American TV show. But it was such a safe place to be creative. When there were issues, we would have to figure out solutions fast and we actually wound up being more creative in the process.

Coming from Chicago, did you allow any improv on set?
I love improv and I come out of that tradition. But that said, the show was pretty tightly scripted. I do, however, try to write a naturalistic type of dialog that’s often derived from my own mental improv.

Did anything surprise you in making the series?
Everything surprised me. It was amazing from beginning to end. And the best experience I had was filming in Mississauga on location in a house. It was challenging with lighting and things like that, but it gave it a sense of magic to be in a real family’s home. It helped the actors really identify with their characters and the storylines.