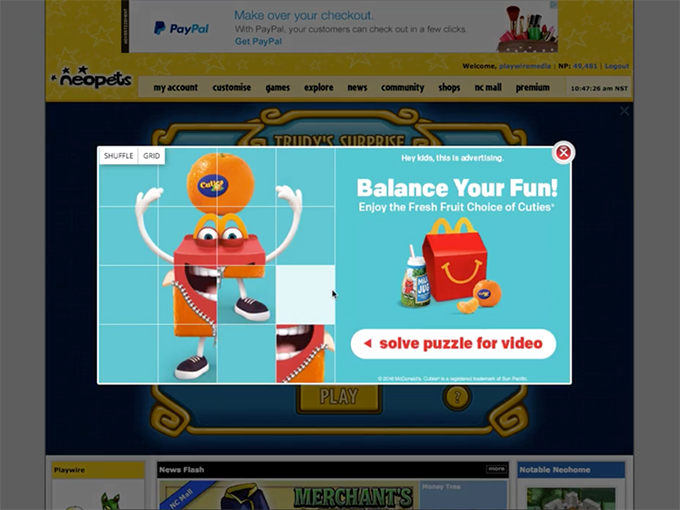 According to digital business analytics company comScore, Kids Club has now surpassed Nickelodeon as the largest kidSAFE and COPPA-compliant online children’s network. With that designation in hand, Kids Club will be putting more emphasis on its video initiatives.

“The fact that we built our own video player and that we can serve video into apps, websites and connected TVs is our biggest revenue-generating opportunity, and it’s something we see as a limitless opportunity,” says Playwire CEO Jayson Dubin. “We’ll be looking for streaming partners next, and we’re also talking to some partners about the immense potential of virtual and augmented reality.”

“Millennial parents now number more than 22 million in America alone, with 9,000 babies being born every day. As this will be the most connected generation of children to date, it is incumbent upon Playwire Media, as a leader in the space, to create and foster online communities that securely deliver appropriate and relevant advertisements for kids,” Dubin says.

Through Kids Club, Playwire manages the entire technology stack of a publisher—including direct, indirect, and programmatic sales—and its proprietary video platform hosts and streams all the video required by the various sites.

To date, the company’s community of more than 250 million unique monthly visitors in more than 200 countries makes Playwire one of the largest ad rep firms of its type. Its client list includes more than 70 industry-leading brands such as Kellogg’s and McDonald’s.

Dubin says Playwire chose to enter the kids business after taking a step back and examining the source of its incoming ad dollars.

“Twenty-percent was actually from kids advertisers like Lego, Hasbro and Disney XD, to name a few. So we started talking with some of the kids websites and realized there was a lack of advertising solutions for them,” says Dubin. “Very few online ad networks are COPPA-compliant, almost no ad placement exchanges are, and there was no one doing site-specific ad sales.”

In aligning itself with publishers, Playwire instituted a revenue-share model.

“Online ad networks are inherently against publishers because most online ad networks or exchanges (platforms through which advertisers bid on a publisher’s website inventory for ad placement) try to buy as cheaply as possible and sell for as much as they can. Their best interests don’t align with a publisher, but on a rev-share, we’re always aligned with them. If they don’t like the creative, we don’t mind pulling it. We’re in it together,” he says.

In terms of revenue dollars and international growth, Dubin says its North American business is strong, and the UK remains a fast-growing market. Still, the company is being strategic as it expands.

“We would love to tackle a region like Asia, but it’s not been on our purview just yet because it’s such a foreign market to us. And even though we’re a mid-sized organization, we’re not venture-backed with private equity. We have to be very methodical of where we launch,” he says.

What is moving quickly, however, is the kids online ad industry as whole.  “The break-neck pace does keep me up at night. And the technology has become incredibly complicated. Just to run any type of program now, it takes four different ad servers,” Dubin says.