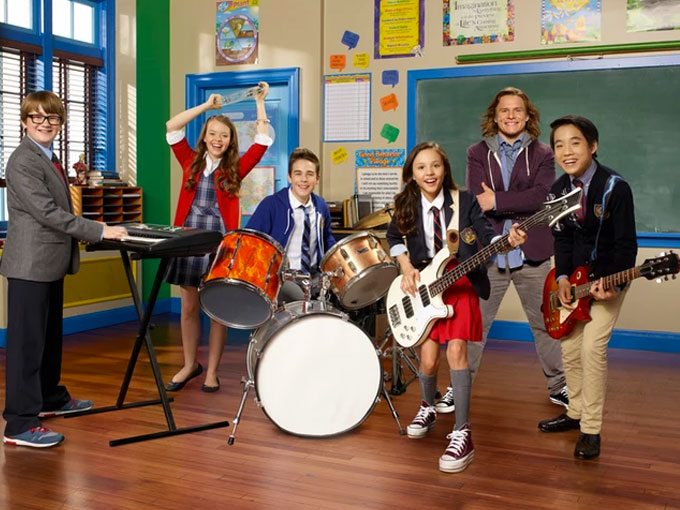 Nickelodeon and Paramount Television's plans to adapt the popular film School of Rock for the small screen are coming to fruition March 12, when the live-action comedy series of the same name bows on the kidsnet.

Nickelodeon and Paramount Television’s plans to adapt the popular film School of Rock for the small screen are coming to fruition March 12, when the live-action comedy series of the same name will bow on the kidsnet.

School of Rock was developed by Jim and Steve Armogida (Crash & Bernstein, Grounded for Life), who also serve as executive producers with Jay Kogen (The Simpsons, Henry Danger). Richard Linklater and Scott Rudin, director and producer, respectively, of the 2003 feature film, serve as series executive producers, along with Eli Bush (The Newsroom, Ex Machina). The straight-to-series pickup by Nick, encompassing 13 episodes,  was originally slated for a spring 2015 premiere.

The show follows a group of overachieving prep school students who band together and learn to play in a rock band when they meet their new, unconventional substitute teacher (Tony Cavalero). Throughout the school year, the middle-school classmates find themselves navigating relationships, discovering their unknown talents and partaking in a number of musical performances. (Renditions of The Romantics’ “What I Like About You” and The Who’s “The Kids Are All Right” are to be expected).

The series, which will feature guest appearances from Pete Wentz (Fall Out Boy), Kendall Schmidt (Big Time Rush) and Kira Kosarin (The Thundermans), will premiere at 9:30 p.m., and then subsequently air on Saturdays at 8:30 p.m. Fans will also be able to access additional content, such as musical games and activities, at Nick.com.

The series will also make its debut on YTV in Canada on March 31 at 7 p.m., where it will air on the channel’s Thursday night time slot.