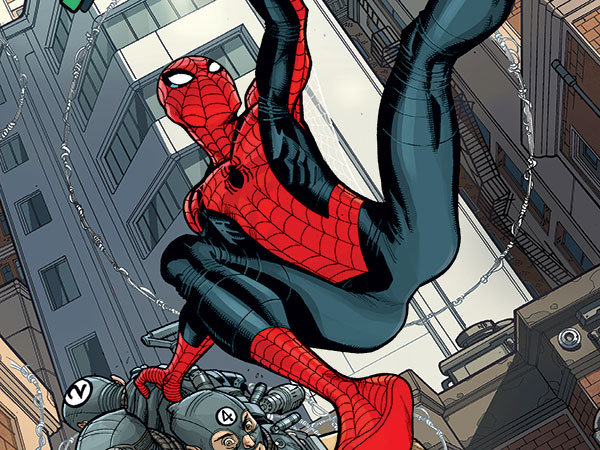 With season four of animated series Marvel's Ultimate Spider-Man vs. The Sinister 6 set to bow on Disney XD in late February, followed by a rollout across Disney Channels worldwide, Marvel and its licensees are prepping a range of new Spidey products and refreshing existing lines with new art and packaging.

With season four of animated series Marvel’s Ultimate Spider-Man vs. The Sinister 6 set to bow on Disney XD in late February, followed by a rollout across Disney Channels worldwide, Marvel and its licensees are prepping a range of new Spidey products and refreshing existing lines with new art and packaging.

The program builds on Disney-owned Marvel’s efforts to position the webbed one as a global evergreen property, as opposed to one driven by a string of event films. And it appears to be working.

“We’ve done a lot of research with consumers, and we’re always amazed at how strong he is as a character,” says Brian Siegel, Marvel director of franchise development. “What sets him apart is his ability to shoot webs—there’s no other superhero like that.”

Marvel’s research also uncovered the fact that Spider-Man’s core motto—with great strength comes great responsibility—resonates particularly well not only with kids, but also with parents. “It really means something, especially to a mom who’s making some of the purchasing decisions for the younger kids,” says Siegel. “She knows this is a superhero with a purpose, who is doing good and who is responsible. It’s an attribute she wants to pass on to her kids.”

To keep Spider-Man front-and-center at retail, Marvel is treating every year as though it were an event film year by focusing on three key areas—new content, new products/innovation and close collaboration with retailers.

“We were able to get that new product in non-film years, because we proved to retailers that consumers don’t go away with Spider-Man,” says Siegel. “We’re really emphasizing how important the TV series is, as well as publishing, games—especially mobile—and the Marvel kids Spider-Man website. It’s that daily engagement. That’s what makes an evergreen franchise like Spider-Man more important than a film franchise. This is the first time there’s been a two-year lapse between movies, and there hasn’t been a significant decay. His affinity is stronger than ever.”

As for what’s coming down the pipe, toy partner, program anchor and one of the brand’s long-running licensees, Hasbro, will look to capitalize on the half dozen villains being introduced in the new TV season, Marvel’s Ultimate Spider-Man vs. The Sinister 6, with its 3-¾, six- and 12-inch action figures.

Another key food partner is soon expected to join the program, which Seigel says has been seeing significant growth across categories like apparel, backpacks, footwear, food and oral care—despite the fact that most Marvel properties are led by action figures and construction sets.

“What makes Spider-Man unique is that it has such a broad consumer demo,” he says. Other big-name licensees for the brand include LEGO, Kellogg’s, Proctor & Gamble, Johnson & Johnson and Random House.

At retail, Siegel says Walmart plans to dedicate feature space for new Spider-Man merch in step with the show’s launch, including end caps in many of its US locations. That’s a pretty significant commitment from a retailer to a superhero property in a non-film year, he says, contending it’s also a clear indication that an IP has entered evergreen territory.

“We’ve never had that before in a non-film year,” says Siegel. “What it comes down to is new product, and that’s really the main emphasis of our strategy for Spider-Man. We have to make sure that all of our licensees are creating newness within the industry—new partners, new innovations, and new categories.”

And it’s not just Walmart cashing in. Toys”R”Us, Target, Disney Stores, Amazon, JCPenney and Macy’s are getting in on the action and will be including Spider-Man in their spring and Easter promotions, Siegel says. Kohl’s has also really started to buy into the Spider-Man program in a big way, he adds. “It really is all levels of retail, from mass to specialty, and pretty much all consumer targets.”