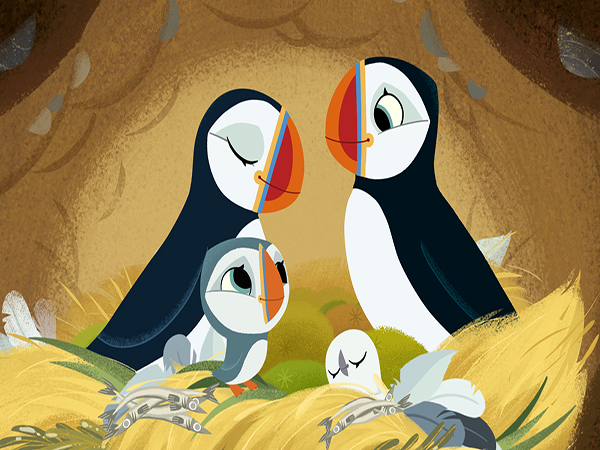 Despite uncertainty around how it would be received, Cartoon Saloon co-pro Puffin Rock quickly won the favor of Nick Jr., Netflix, Hoho Rights and many more since its January 2015 debut.

When Irish studio Cartoon Saloon decided to develop a natural history show for preschoolers featuring puffins in their native environment, there was some uncertainty about how it would be received by buyers.

But Netflix was quick to snap up the SVOD rights to Puffin Rock exclusively for the US, Canada and multiple territories just a month after its UK television debut last May. And since its on-demand premiere in September, a number of new broadcast and licensing deals have been signed.

It follows the adventures of a family of puffins, including young puffling Oona and her little brother Baba, as they explore the sea, sky and land around their wild and beautiful Irish island home.

The original concept for the show materialized after Cartoon Saloon co-founder and creative director Tomm Moore visited an island inhabited by puffins while on holiday, during the production of feature film The Secret of Kells.

“Their first ambition, before developing a TV show, was to make picture books and do kids events in Derry,” says Young. “So we decided to jointly publish a Puffin Rock book because we had a lot of lovely artwork and stories, and I wasn’t getting enough bites from the broadcast market at the time.”

But once Campbell met with Penguin at the Children’s Media Conference in 2012 and the publisher agreed to support a multiplatform Puffin Rock IP encompassing TV, apps and digital and physical books, the project really took off.

With a strong co-production team intact, RTÉ and Nick Jr. UK got behind Puffin Rock before any books were released and Irish actor Chris O’Dowd (Bridesmaids, The IT Crowd) was hired to narrate the series with a gentle brand of humor and education.

“I think that since Bridesmaids, Chris O’Dowd has kind of legitimized the Irish accent again,” says Young. “We weren’t sure how people would take the Derry and Donegal accents so it surprised us when we discovered that people in North America love them.”

Promotions and growth According to Young, the majority of the promotion for the series occurred online and through social media, especially with mommy bloggers and nature sites. Nick Jr. UK also gave the series a huge boost by launching it in a 7 p.m. slot right after mega-hit Peppa Pig.

And once the ink dried on the Netflix deal, the program was sold to NRK (Norway), SVT (Sweden), DR (Denmark), RUV (Iceland) and ABC (Australia).

RTÉ showed ongoing confidence in the property by greenlighting a second season a day after debuting episode one of the first in January 2015, while Nick and Netflix both went a step further by ordering season two before airing the first one at all.

On the licensing front, global licensing agent Hoho Rights is currently looking to secure UK and international licensees and retail partnerships for the IP, and French distributor Superights is handling international distribution.

With production on season two wrapping in February, Penguin set to launch companion books early this year, and an iPad game in development, viewers and consumers can expect to see a lot more of Oona and Baba in 2016.