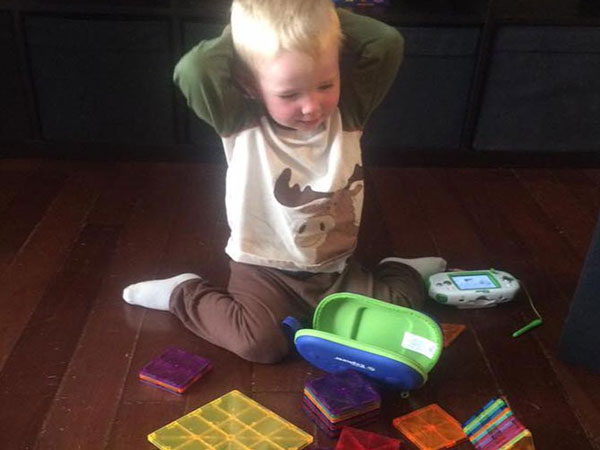 It may look messy, but children's experimentation with deconstruction is just as vital as their construction - and development - processes.

Parents applaud with glee when kids build block towers. The developmental link is clear—they are beginning to define shapes and play with spatial reasoning and creative imaging. “She’s the next Frank Lloyd Wright!,” mom says.

Adults love the idea that these crude structures could be the first works in kids’ future architecture or engineering portfolios. But are we equally thrilled when we enter a room of toys that looks like the wreckage after a demolition derby? What we fail to recognize as we collect pieces of debris from their destruction epicenters is that our children’s experimentation with deconstruction is just as vital as their construction processes.

By building and breaking down, and building again, kids start to tinker with iterative process, fine-tuning their designs. This is not only an exercise in practice and precision, but it reaffirms their sense of gravity, informing their understanding of early physics.

Infants start to discriminate visual patterns as early as one month old. This development models early processing of figure-ground perception (recognizing objects). As kids grow and build imaginative structures and basic systems, they begin to experiment more meaningfully with early geometry—ideas of Lego construction and puzzle piecing as motor skills develop (and the small pieces are no longer a choking hazard).

Enter the age of virtual building. When kids play in Minecraft, they spend nearly as much time mining, seizing and creating new building materials as they do actually building. Mining is by no stretch a craft and a science. Demolition and collecting wreckage are key game mechanics. Kids have to break down and combine block compounds to source their desired materials. In this deconstruction, chemistry learning is a by-product of sheer experimental play.

From Tetris to Candy Crush, kids are using digital games to master pattern recognition and refine spatial concepts. These game spaces are taking the classic play practice of building with blocks to teach 21st century skills, such as coding.

Visual coding platforms that use block language cultivate early learning systems thinking, logical reasoning, and sequencing. Kids can use game-makers like Scratch, Beta, Gamestar Mechanic, and a plethora of sandbox games to create virtual spaces for themselves and their peers to play in. De-bugging in these game worlds compels kids to un-build something broken in order to identify the problem and re-build something functional.

For TV content, consider depicting lots of building and busting up, and showing the process. You may just be helping a kid learn to code!