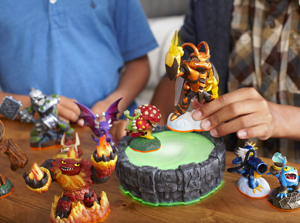 Within an overall stagnant US video game market, interactive toy accessory (toys-to-life) sales experienced 13% growth in 2015, according to the most recent findings from market research firm The NPD Group.

Within an overall stagnant US video game market, interactive toy accessory sales experienced 13% growth in 2015, according to the most recent findings from market research firm The NPD Group.

In 2015, video game sales across physical software, hardware and accessories were flat compared to 2014.  Including physical PC games, overall physical sales decreased by less than 1%, while accessory spending, which overall rose by 12% from 2014, helped offset single-digit declines in hardware and software spending.

That level of accessory growth is attributed to strength in the ever-popular – and increasingly competitive - interactive gaming toy category, which was the leading accessory of the year thanks to franchises like Activision’s Skylanders, Disney Infinity, Lego Dimensions and Nintendo Amiibo. Also seeing growth in the accessory category are point cards, gamepads and headsets/headphones, which together with interactive toys, increased sales by US$351 million over 2014.

According to NPD’s summer 2015 Interactive Gaming Toys report, 70% of parents surveyed in the US are familiar with interactive gaming toys (also known as toys-to-life), with 40% owning items from at least one of the three main franchises, Skylanders, Disney Infinity or Nintendo Amiibo, and 41% of that group owning more than one franchise. In terms of dollars spent over a six-month period from late 2014 to early 2015, parents estimated they shelled out an average of US$131 on games and characters from one of those franchises.

On an overall annual basis for 2015, hardware sales decreased by 4%, with console and portable sales both dropping by the same amount.  But new consoles proved to have a fruitful holiday season, as December 2015 marked the best month to date for Sony’s PS4 and Microsoft’s Xbox One unit sales. December also marked the second-best month for Nintendo’s Wii U’s new physical software unit sales.