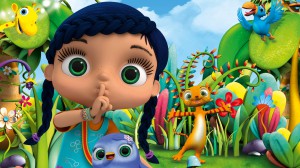 German brand manager m4e has appointed brand4rent as the licensing agent for its new preschool property Wissper in Russia and CIS territories.

German brand manager m4e AG has appointed brand4rent as the agent for its new preschool property Wissper in Russia and the CIS territories.

The Moscow-based company will rep the 52 x seven-minute series across licensing and merchandising in the region, while EMEA master toy partner Simba Dickie Group anchors the consumer products program.

Aimed at preschool children, Wissper follows the adventures of a little girl by the same name who can communicate with animals. This allows her to understand their problems and help solve them.