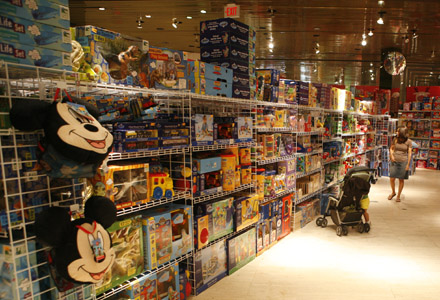 An increase in international, domestic online and core toy sales spurred growth in both the five- and nine-week holiday run-up periods for toy retailer Toys"R"Us.

Stateside, same-store sales this holiday season increased by 2.9% and 1.4%, respectively, for the five- and nine-week periods for the week ending January 2, driven by the strength of online purchases. Gains in core toy, learning and seasonal categories were partially offset by a decline in entertainment (electronics, video game hardware and software).

Globally, same-stores sales were up by 5% and 3.1%, respectively, for the five- and nine-week periods through the week of January 2. Growth in Canada and Japan was partially offset by declines in Europe. International toy sales have been TRU’s bread-and-butter over the past year.

The latest report from TRU is another positive sign for the toy retailer, whose struggles to turn the company around have been well-documented. Despite flat sales in Q3, TRU managed to trim sales and administration costs, which is one of the key goals of its transformation strategy.