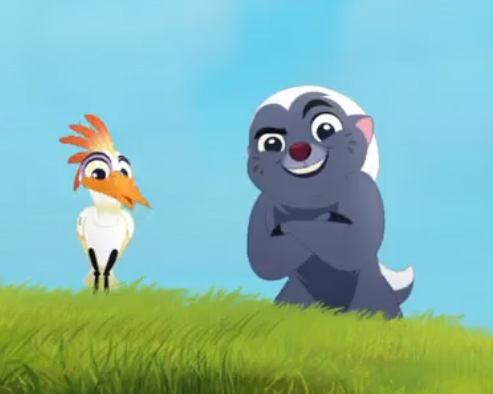 A honey badger and an egret from Disney's upcoming series The Lion Guard could become the new Timon and Pumbaa, thanks to the new short-form series It's UnBungalievable.

Bunga the honey badger and Ono the egret from Disney’s upcoming series The Lion Guard could become the new Timon and Pumbaa, thanks to It’s UnBungalievable, a short-form spinoff series set to premiere on Disney Junior and Disneynature on January 9.

Hosted by the animated duo, the educational and comedic nature-themed series delivers facts about animals and their habitats while splicing in live-action wildlife footage from Disneynature.

Each episode will also feature two animals picked by Bunga (Joshua Rush) and Ono (Atticus Shaffer) that compete in such categories as Who’s Quicker?, Who Has Better Hair? and Who’s Hungrier?

It’s UnBungalievable is a Disney Television Animation and 7ate9 Entertainment production, made in association with Disneynature, and executive produced by Ford Riley (The Lion Guard: Return of the Roar, Special Agent Oso).

The new series comes after The Lion King‘s first television spinoff, primetime Disney Channel movie The Lion Guard: Return of the Roar, became the number-one primetime US cable TV telecast of 2015 among kids two to five and the top-rated animated telecast across all kids cable-TV networks among total viewers and adults 18 to 49 after its November debut.

The Lion Guard TV series is set to make its Disney Channel debut on January 15.