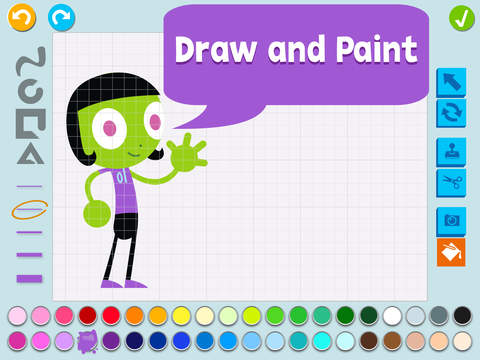 The programming blocks seem to be falling into place for coding platform Scratch, which, following its recent collaboration with Cartoon Network, has now teamed with PBS KIDS on an app called PBS KIDS ScratchJr.

The programming blocks seem to be falling into place for coding platform Scratch, which following its recently announced collaboration with Cartoon Network, has now teamed with PBS KIDS on a coding app called PBS KIDS ScratchJr.

The tablet app, which is available for free on the App Store and on Google Play, is designed for kids ages five to eight, who are encouraged to snap together color-coded programming blocks that create sequences of actions that cause characters to move, jump, dance and sing. Other features include the ability to choose from more than 150 characters, edit backgrounds and voice recording.

PBS KIDS ScratchJr was developed in collaboration with the MIT Media Lab and Tufts University’s DevTech Research Group as part of the Corporation for Public Broadcasting (CPB) and PBS Ready To Learn Initiative, with funding from the U.S. Department of Education. It’s an offshoot of the 18-month-old ScratchJr app that was launched by MIT, Tufts and the Playful Invention Company via Kickstarter in 2014, meeting its US$25,000 funding goal within two days and eventually attracting US$77,474 in donations by the campaign’s end.

Through the outreach efforts supported by Verizon and Ready To Learn, PBS member stations will extend the reach of PBS KIDS ScratchJr to underserved communities. In 2016, local stations across the US will use the app’s content to help children in their communities learn coding skills through outreach programs and partnerships with Title I schools.