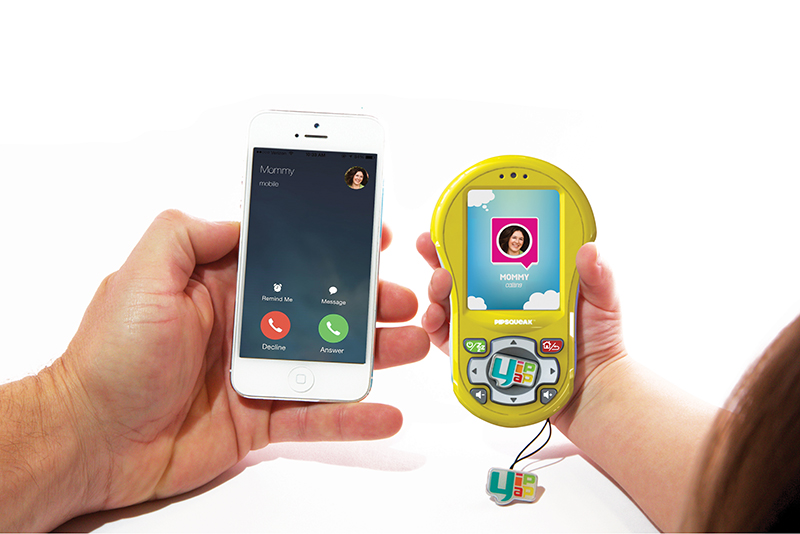 Michael Smith, CEO of Yip Yap, thinks the last thing kids need is their own smartphone. So his startup designed a Bluetooth-enabled device that connects to parents' phones instead. Smith tells iKids about Pipsqueak's plans to face a crowded market through innovative hardware and software.

With today’s digital natives arguably born with a smartphone in one hand and a tablet in the other, it was really only of a matter of time before a Bluetooth-enabled smartphone for kids would arrive on the market.

In recognizing that screen time is simply just becoming “time”—and that 73% of kids under five are using smart devices—Austin, Texas-based startup Yip Yap has launched what it calls the first-of-its-kind Bluetooth smartphone, named Pipsqueak, which targets kids ages three to eight.

To disconcerted social media commentators who think the last thing young kids need is their own smartphone, Michael Smith, CEO and founder of Yip Yap, wholeheartedly agrees. In fact, that’s why the 18-year wireless technology industry vet designed Pipsqueak in the first place.

Part of the thinking behind the device is that the technology embedded in today’s smartphones is not appropriate for young kids. Another element is that a device such as Pipsqueak no longer means parents have to fork over their US$530 or more smartphone to a youngster.

“This is meant to be an age-appropriate piece of technology,” Smith says. “We’re building it so parents can use it to drive the right behavior.”

Pipsqueak, which in September won the wireless category and tied for second overall at the 2015 Cellular Telephone Industries Association’s Lab Startup Showcase, connects to parents’ phone via Bluetooth and a corresponding app. Kids are not able to use it to browse the internet, and parents control all content that goes into their kids’ 2GB Pipsqueak, including games, music and videos. The handheld device is also equipped with other fun features like a sound board and voice recorder.

As for making calls, there’s no keypad and kids don’t have their own phone number. Parents set both the incoming and outgoing caller list with pictures (i.e. of mom, dad, grandma), which allows kids to simply use the device’s picture-based navigation pad to choose who they would like to call, instead of taking on the daunting task of remembering phone numbers.

Canadian technology analyst Carmi Levy says similar types of devices have failed to gain traction in the market because they often come with their own specific set of requirements with which parents don’t want to deal. However, she believes a device like Pipsqueak—which runs on an Android operating system—could benefit kids as a useful gateway device, since the need to have a smartphone is crucial in today’s digital world. And it just may attract a different breed of app developer looking to differentiate itself from the pack.

“The key here is not necessarily so much the hardware—it’s the software,” Levy says. “Parents will want to know if apps will be readily available, if they will be inexpensive or free, and if will there be enough developers creating innovation. If the ecosystem develops around this new hardware, it stands to benefit children at an age that the existing mobile industry has failed to address.”

To that end, Yip Yap is looking to add both free and paid content. It’s had preliminary talks with companies like Disney on that front, and Sphero has shown an interest in using Pipsqueak to control its app-enabled robotic balls. Other developers the Yip Yap team met at a recent Android conference have also expressed an interest in making games and apps unique to the device.

“Now that the hardware is at the point where it’s at version one, the next big push for us is going out there and sourcing as much content as we can,” Smith says about Pipsqueak, which has gone through several prototypes since his wife Angela came up with the idea in 2011.

Another potential lucrative revenue stream for Yip Yap is through partnering with kids entertainment companies to package the device’s interchangeable faceplates with content. For example, if Yip Yap were to partner with Nickelodeon, parents could buy their child a SpongeBob SquarePants faceplate that might come with a game, sounds bites from the show or even short video clips.

“The idea is that if parents want more of that content, it will be available to them to purchase,” Smith says.

While time will tell if the US$2.8-billion smart toy market is ready to welcome smartphones into the mix, Yip Yap has already pre-sold 10,000 Pipsqueaks. Those devices will be available at US bricks-and-mortar wireless retail locations in May 2016 for US$129 apiece.

In the meantime, Yip Yap has just launched an Indiegogo campaign, where Pipsqueaks are being offered at a discounted price. The first phones will be shipped to early backers in December, and the rest by May.

“There’s always a market for everything,” says tech analyst Levy. “I think the question revolves around whether or not it’s large enough to justify the investment in research and development, manufacturing and marketing, and maintaining a supply chain. Can they sell enough devices in order to justify what it costs to bring those devices to market in the first place? That ultimately is the biggest unanswered question.”