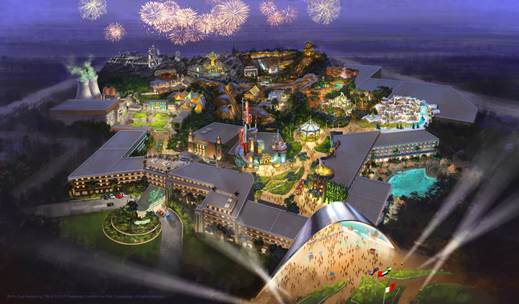 The deal between AAGH and Fox also allows for up to three additional branded resorts in territories outside of Dubai.

California-based Rethink Leisure & Entertainment is handling design and production services for the 20th Century Fox World theme park, which will include themed-lands, a range of thrill and media-based dark rides, as well as a themed retail street for shopping and dining based on Fox’s properties. Some of the hit IPs featured in the park will be Ice Age, Rio, The Simpsons, Planet of the Apes, Aliens, Predator and Night at the Museum.

With rooms and dining designed to give visitors a fully immerse experience with the company’s iconic entertainment brands, the branded resort component of Dubai’s 20th Century Fox World is a first for the company.

The theme park industry has been expanding throughout 2015, particularly in the US, where the first Thomas Land park opened this summer. Also, in August, Disney announced plans to create Star Wars-themed lands at both Disneyland in California and Walt Disney World in Florida.