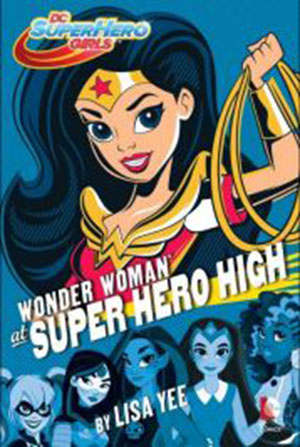 Edited by Christy Webster, the portfolio of books from Yee will aim to bring the DC Super Hero Girls world to life through all-new stories that will expand upon the animated content and feature new super heroic adventures.

Lee, the author of Millicent Min, Girl Genius, Stanford Wong Flunks Big-Time and So Totally Emily Ebers, will portray the iconic female DC Comics characters as teens attending Super Hero High, where they learn how to nurture their powers and the fundamentals of what it takes to be a super hero. In her first title, DC Super Hero Girls #1: Wonder Woman at Super Hero High, students will be introduced to their new, super strong classmate. The novel is scheduled to hit books shelves on March 1.

The novel series from the Random House Children’s Books imprint is part of the brand’s larger publishing program, which will also include graphics novels. The anticipated franchise has also attracted some of the biggest names in the kids entertainment business, such as LEGO and global master toy licensee Mattel.

DC Super Hero Girls, which is aimed at girls ages six to 12, is also part of a larger movement within the industry to launch IPs based on female super heroes.