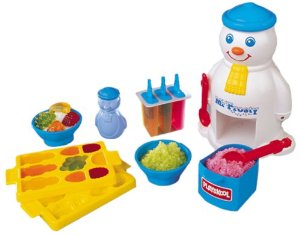 Hasbro is in many ways looking to the past to further its future licensing activities across Europe. The company is reviving Stretch Armstrong, Action Man and Mr. Frosty (pictured), along with signing new lifestyle products licensees for My Little Pony and Transformers.

Rhode Island-based toyco Hasbro is in many ways looking to the past to further its future licensing activities across Europe. The company has unveiled a crop of retro toys as well as new lifestyle products for its evergreen My Little Pony and Transformers brands at Brand Licensing, taking place this week in London.

Ahead of the 2017 global debut of a full-length animated My Little Pony feature film, which is being produced by Hasbro’s Allspark Pictures, Catalan designer Maria Escoté will develop a new fashion line that will launch during Madrid Fashion Week in February 2016. A marketing campaign will allow fans to discover how she Escote takes the most iconic pieces of the My Little Pony world and turns them into fashion by following #MLPbyMariaEscote. Meanwhile, a My Little Pony by UNDIZcollection features retro character designs, and the underwear and nightwear line is already being sold in more than 100 UNDIZ stores and online.

The Transformers brand is also getting more fashionable thanks to UK designers FYODO GOLAN, which will release an inspired collection of high-end apparel that was first seen during last month’s London Fashion Week. A line of shirts for women, some of which will don a Transformers character made of rhinestones, is also in the works from designer Philipp Plein.

Additionally on the Transformers toy front, Hasbro has forged a new licensing agreement with Dickie Toys, a Simba Dickie Group company, to develop a line of branded vehicles and playsets that will debut in 2016. The range is slated to include RC cars, die cast vehicles, vehicles with lights and sounds, and themed playsets.

Hasbro has also licensed global rights for its iconic Stretch Armstrong toy brand to The Character Group, which will unveil a line of classic toys next summer.

Retro toys are also in the works for the 50-year-old Action Man brand, as Hasbro has licensed Art + Science International, a specialist in developing and launching retro toys, to release five Action Man collector-edition figures in June 2016. The range will include the classic British infantrymen, the skier, the parachutist, the scuba diver, and the footballer, with each featuring accessories, gripping hands, a realistic “flock” of hair and the character’s famous scar.