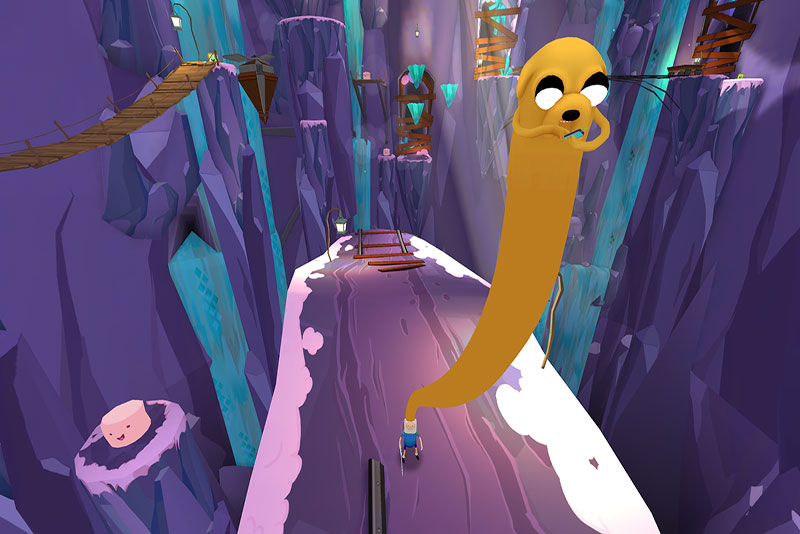 "We wanted to creatively have our muscles ready for VR when it does take off tremendously," says Cartoon Network Digital's VP Chris Waldron, one of the forces behind the net's ambitious new Adventure Time project that's taking a first step in the impending virtual reality race.

Jake, Finn and the Land of Ooo are making history while betting on the future. The stars of Cartoon Network series Adventure Time are headlining the first virtual reality game based on a TV franchise in an effort to outpace the competition in an impending VR race.

Adventure Time: Magic Man’s Head Games, voiced by the cast of the long-running television show, including series creator Pendleton Ward, is an action platformer that offers a virtual reality experience through a Samsung Gear headset and compatible Galaxy Note 4 or Galaxy S6/S6 Edge smartphone. Once the gaming software is downloaded, the headset is turned on and the Bluetooth controller enabled, the show’s post-apocalyptic Land of Ooo opens up into a totally immersive experience where Finn and Jake take the user (in the form of a new character named Tiny) on a quest to overturn the mischievous Magic Man’s spell. The game is free and available for GearVR in the Oculus Store.

Now in its seventh season, Adventure Time has fans of many ages and in many places – including DIY platform Esty, for one – which made it the right fit for this new level of immersion, according to Cartoon Network Digital VP Chris Waldron.

“The Adventure Time audience is a big one, and it offers an intersection with VR enthusiasts. The show centers on the kind of world you want to explore,” Waldron says. “For us, what VR represents is a chance to step into a world. When you watch traditional TV, you’re looking into a window. In VR, you’re fully there.”

In creating the experience, the net tapped L.A.-based Turbo Button, which developed the game over the course of a year with the input of Waldron’s VR-enthused digital team. The strategy has been to borrow elements that work on TV – such as the original voice-overs and similar story elements – while also taking advantage of what’s available in virtual reality. The game will also be treated similarly to a platform console game or mobile game that is made in a new space. (Cartoon Network’s Adult Swim launched Virtual Brainload as a VR experience this spring, but Adventure Time’s Head Games is positioned as a game).

Waldron also says the Samsung Gear offers up the best platform right now to make this all happen.

“At this moment, Samsung has the widest distribution and the best performance. It’s still early in the VR race, so we wanted to do something fairly intensive that will represent what the medium can do. People who experience VR content want more, and the industry is rapidly trying to make a smaller footprint. Think about where the gear is at now – there’s been phenomenal improvement with room to go further,” says Waldron. “Adoption is the main question going forward.”

In short, you need the gear to get it.

VR tech penetration isn’t widespread yet, despite significant hardware developments and investments – like the staggering US$2 billion Facebook paid for Oculus in 2014 – over the past year. Analysts, marketers, developers – and now TV nets – are anticipating consumer traction to take hold by the holidays and through 2016.

According to a June 2015 BI Intelligence report, the current US$37 million virtual reality hardware market will swell to US$2.8 billion by 2020. And the gaming market presents a particular goldmine in VR as there are nearly a billion active mobile gamers worldwide, according to the same report.

The big tech players are doing their part to make that happen: Oculus, Sony, HTC and MergeVR are coming out nearly bi-monthly with VR sets sporting consumer-friendly price tags. A new US$99 Samsung Gear VR headset, which is compatible with any 2015 Samsung mobile device, was just announced today.

And when the price is right for kids, they are ready to play. According to recent findings from Touchstone Research, 79% of US 10- to 17-year-olds say that they’ve heard of VR technology, while 68% have an understanding of it and 47% say they know some or a lot about VR. The survey found that 75% of kids want to ask for a VR device, but only if it’s priced on par with gaming consoles.

UK-based Dubit has taken note of VR’s potential impact on kids, having recently conducted research with boys and girls ages seven to 12, letting them play a range of games within the Oculus Rift environment, then asking for their opinions and ideas about what might come next and what they’d most want.

And Waldron spends his days at Cartoon Network going after what kids want. His team has churned out a number of Adventure Time-branded mobile games, which together have garnered 17.5 million downloads to date.

He says the allure of the Adventure Time brand has enabled Cartoon Network to embrace this level of VR tech ahead of competitors.

“I haven’t seen anything from [competing kidnets] yet. We wanted to creatively have our muscles ready for VR when it does take off tremendously.”