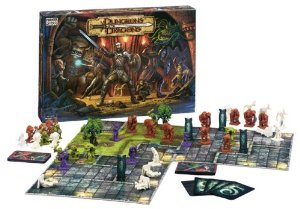 While a release date has not been set, Warner Bros. has a script in-hand from David Leslie (The Conjuring 2, Wrath of the Titans). Roy Lee (The Lego Movie, How to Train Your Dragon), Hasbro’s Brian Goldner and Stephen Davis and Sweetpea’s Courtney Solomon and Allan Zeman are on-board as producers.

First published in 1974 by Tactical Studies Rules, Dungeon & Dragons has been played by millions around the world and inspired writers, directors and game designers.

The Dungeons & Dragons feature film announcement comes after a legal battle and months of negotiations between Hasbro and Wizards of the Coast with Sweetpea Entertainment over who owns movie rights.

For toy giant Hasbro, this is the second announcement in just over a month that its moving a board game to the big screen. Hasbro’s Allspark Pictures is also partnering with Lionsgate for a Monopoly-inspired feature film.