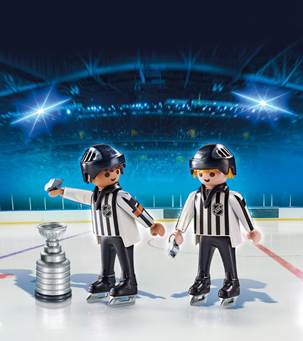 After 40 years as one of the world’s leading toycos, iconic Playmobil is making a play in the North American licensing arena, thanks to a deal with the National Hockey League.

After 40 years as one of the world’s leading toycos, iconic Playmobil is making a play in the North American licensing arena, thanks to a deal with the National Hockey League.

The first Playmobil NHL line will feature the sport’s original six teams (Boston, New York, Montreal, Detroit, Chicago, Toronto), a play ice rink, referees and a Zamboni ice-resurfacing machine. Complete with interactive players and goalies that can shoot and stop the puck, the line will hit all tiers of North American retail in October, timed with the start of the 2015-2016 NHL season.

While plans are in the works to add the rest of the league’s 30 teams, the initial goal is to get the first batch of products into the market to gauge consumer reaction, according to Playmobil’s Canadian director of sales and marketing, Richard Brookes.

As to why Playmobil chose the NHL for its first North American in-bound license, especially since hockey is not the most popular professional sport in the region, Brookes says the game is a perfect match for Playmobil’s brand.

“Hockey really fits well with our format of toys,” Brookes says, referring to a similar interactive soccer line that is popular in Europe. Hockey also aligns with the company’s motto of giving children creative license to use their imaginations during play. “Hockey, particularly the NHL, gives kids a playing field. And from there, they can develop their own characters, thoughts and imagination to be whichever player or number they want to be.”

Now that it’s finally entered the North American licensing market, Playmobil is also scouting for other potential partners, both in the sports and character-based entertainment worlds. “We have interest in lots of properties, and we’re going to choose what’s correct for us and correct for the property, too,” says Brookes. “That’s all I can say.”

To be sure, any licensing partnership Playmobil considers will have to be on side with the company’s core goal of fostering children’s imagination through play. “With some licenses, you’re basically leading kids into a play pattern,” he says. “We’ve been very, very cautious about it for the past 40 years, but times change and companies adjust as they go forward. We’re still about imagination, and that’s what our future is about as well.”

This article was originally published in Kidscreen’s July/August 2015 issue.