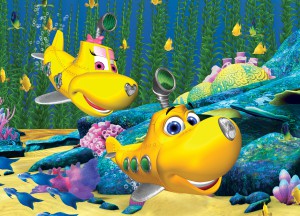 L.A.-based Splash Entertainment has secured three new distribution deals that will send a number of its popular animated titles to digital outlets worldwide, including US streaming service Hulu.

L.A.-based Splash Entertainment has secured three new distribution deals that will send a number of its popular animated titles to digital outlets worldwide, including US streaming service Hulu.

Seasons one and two (52 x half hours) of Hero: 108, season two of 52 x 11-minute preschool series Dive Olly Dive, and 26 half hours of The DaVincibles are now available to stream on Hulu and more yet-to-be announced titles will be added through the deal.

In another agreement, Czech Republic’s Urania has snapped up the 52 x 11-minute first seasons of preschool shows Chloe’s Closet and Dive Olly Dive, as well as the 26 x half-hour first season of Gasp for its children’s VOD platform.

And rounding out the activity, France-headquartered digital content provider Mobibase has acquired the same titles, along with Dive Olly Dive season two, 26 half hours of Cosmic Quantum Ray, Growing Up Creepie, I Got A Rocket, Pet Alien season one and 39 half hours of Mixmaster: King of Cards.

The latest deals for Splash follow closely after its first-ever deal with US satellite provider DISH, which acquired five animated series from the prodco’s library.