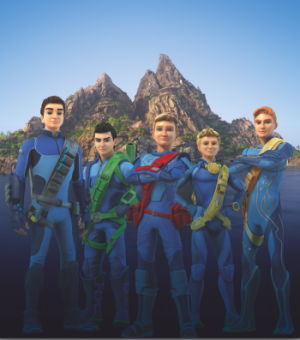 Thunderbirds Are Go CP program takes off in Oz

Thunderbirds Are Go's Australian licensing agent Merchantwise has brokered several new licensing and retail partnerships down under for the new version of the iconic 1960s series.

Thunderbirds Are Go‘s Australian licensing agent Merchantwise has brokered several new licensing and retail partnerships down under for the new version of the iconic 1960s series.

Hachette is now on board as a publishing partner, and its line of story books, sticker books and activity books will be ready in August. For September, mass retailer Big W will launch apparel (outerwear, sleepwear, swim wear) by Hot Springs and accessories from Vimwood. Both are new licensees. Additionally, Australia Post is prepping a range of stamps inspired both the classic and revamped series.

Since launching in Australia this past April, season one of the new Thunderbirds Are Go series (26 x 22 minutes), co-produced by London’s ITV Studios and New Zealand-based Pukeko Pictures in collaboration with Weta Workshop (Avatar, Lord of the Rings), has consistently averaged more than 200,000 viewers on Channel 9′s GO!

A second season of Thunderbirds Are Go has been commissioned and it is expected to begin airing in 2016 and 2017.