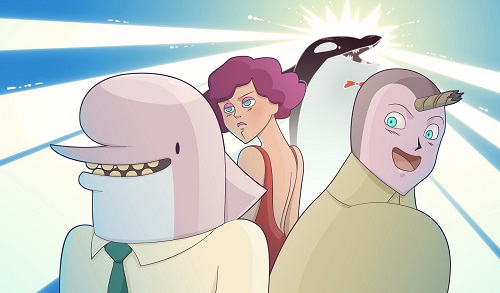 Kidscreen talks with Frederator Networks CEO Fred Seibert about the MCN ramping up its roster of international acquisitions.

In February, American MCN Frederator Networks did something it hadn’t done before in its 10-year history—it acquired a foreign-language cartoon.

The deal for the worldwide rights to distribute an English-language version of the hit Chilean online series Fin Punch, from Marmota Studio, marks a new tactic for the popular MCN. But it’s one more commonly used by traditional broadcasters and established streaming services like Netflix.

“We built our company on the strategy that everything old is new again, and whenever we see opportunities, one of the first things I do is look back over 100 years of media history and ask, ‘How did people succeed?’ Because, as the new world comes into focus, there are basic things that work over and over again,” says Frederator Networks CEO Fred Seibert. “One company can’t make everything itself, no matter how hard everyone tries. Acquired programming is a critical part of building any kind of media empire, and we have a desire to build an empire.”

Launched in February on Frederator’s Cartoon Hangover YouTube channel, Fin Punch is an 18 x one-minute series created by Matías Latorre set in a world where marine mammals and humans co-exist. It follows a dolphin and a narwhal whose conflicting philosophies interfere with their plot to rule the world.

Landing in the US, the series joins a channel that has more than 1.8 million subscribers and nearly 15 million video views per month, when combined with Frederator’s other animation-focused YouTube channel, Channel Frederator.

It’s now in the same lineup as other fan-favorite Cartoon Hangover series such as Pendleton Ward’s Bravest Warriors and Natasha Allegri’s Bee and PuppyCat—funded by the biggest animation or web series Kickstarter campaign in history. (Although Fin Punch is the network’s first non-English acquisition, the first big international YouTube channel to partner with Frederator Networks was Simon’s Cat last year.)

Independent exposure
Seibert says despite the abundance of kids content being created worldwide, only a small percentage of it is truly independent and very little is being discovered. “We really want to give wonderful creators and producers an opportunity for their stuff to be seen. Our acquisition, licensing and distribution strategies are all built around the idea of exposing content that doesn’t have discoverability in the modern digital world,” he says.

As far as deal-making goes, Seibert would not divulge numbers, but says the majority of Frederator’s licensing deals are based on revenue share, rather than an upfront license fee. “It’s not because I wouldn’t like to give a license fee,” he says. “But I just don’t have a firm handle on what I think is going to be the normative audience range that would determine a fair license fee both parties would be happy with.”

As a means of generating more revenue, part of Frederator’s discoverability strategy includes re-packaging online shows into longer-form series to be sold for television broadcast worldwide. And its indie prodco Frederator Studios did just that by partnering with Melbourne, Australia-based Studio Moshi in February to turn the popular online short series Rocket Dog, from animator Mel Roach, into a 52 x 11-minute TV series.

With Frederator Studios handling TV distribution in North America, and Studio Moshi managing other territories, it’s the first project from Frederator Studios’ Too Cool! Cartoons incubator to be developed for traditional broadcast platforms.

TV not dead yet
Despite what Seibert calls the “clash of preconceptions” being the biggest thing creators and networks grapple with on every front, he is confident traditional broadcasters will give more online content a shot. “We know that if we tell authentic stories, eventually people will start to get it. Our bet is that we can build brand value for these programs in the online space, then syndicate traditional terrestrial television in various countries around the world based on that brand value,” he says.

Both programs are headed to Frederator Networks’ new YouTube Kids channel Fredbot to reach a larger English-speaking US audience. “We started seeing other YouTube channels, such as ChuChu TV, Disney Collector and Busy Beavers, get a lot of activity. And we thought, ‘Why not apply some of our knowledge and instinct to the preschool space?’” says Seibert.

Frederator continued to bolster its international partnerships in April by picking up the online channel for Aardman Animations’ Morph, one of the UK studio’s oldest properties.

If all goes according to plan and Frederator can grow the properties’ audiences online new iterations of the web content may one day head to television screens in some shape or form.

“When we go to a broadcaster, we don’t just go with a property, we go with the engagement and loyalty of the audience. In this world, TV looks for viewers and online looks for loyalty. If we identify loyalty and a broadcaster wants to walk away, it’s their loss,” says Seibert.

Broadcast buy-in
Two broadcasters currently not walking away from online content are Nickelodeon and Disney, both of which are looking to strengthen their multiplatform strategies.

Created by writer/composer Billy Lopez (The Wonder Pets!, Phineas and Ferb), the series first launched as six four- to five-minute eps on the Nick App and Nick.com in 2014. Its long-form TV version is expected to debut in 2016.

Boswell, who is currently working on a new round of videos for the series, says there will likely be increased demand for more preschool shorts based on web and social media trends. “As kids become more immersed in the technological landscape, demand for new, cutting-edge content will grow. They will always seek things that will surprise them and make them smile, and to deliver that you need to be innovative in the content you create,” he says. “Disney is clearly taking a chance on supporting new forms of content creation by engaging YouTube artists like myself. It’s a sign that they are ahead of the times.”