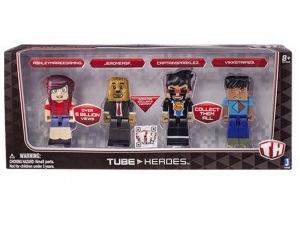 Digital influencers get their own line of action figures, plush

The Tube Heroes line is currently available at Toys ‘R’ Us and soon be available at other mass retailers in the US. Jazwares plans to expand the Tube Heroes portfolio with the addition of toys inspired by social stars from comedy, fashion and sports verticals.