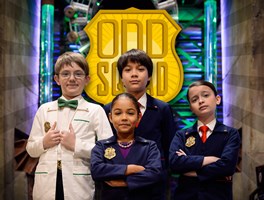 The Emmy-winning series for kids five to eight, featuring the exploits of a secret government agency run by kids, will make its Brit debut on June 22.

Co-produced by Sinking Ship and The Fred Rogers Company, Odd Squad premiered on PBS KIDS and TVO Canada in November and has since been bought by international broadcasters including Australia’s ABC 3, Sweden’s SVT Barnkanalen, Norway’s NRK Super and Brazil’s Gloob.

Before hitting the airwaves, though, the 40 x 22-minute series made a digital-first debut on the Odd Squad website in October, and the IP has since spun out into five multiplatform HTML5 games and a mobile app called Blob Chase.