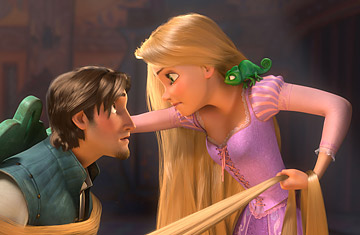 Long-locked Rapunzel and her bandit beau Flynn from the popular Disney film Tangled have snagged an animated TV series.

Long-locked Rapunzel and her bandit beau Flynn from the popular Disney film Tangled have snagged an animated TV series of the same name.

Targeting kids, tweens and families, the new Disney Channel series is now in production with a premiere date expected in 2017.

Animation vets Chris Sonnenburg (Enchanted) and Shane Prigmore (The Lego Movie) are developing and executive producing the series, which will feature music by Alan Menken (who also composed for the movie). Mandy Moore and Zachary Levi are reprising their roles as Rapunzel and Eugene (also known as Flynn Rider).

Set between the feature film and the start of the 2012 short Tangled Ever After, the new Tangled series follows Rapunzel as she gets to know her parents, her kingdom and the citizens of Corona. Joining her are familiar sidekicks Pascal the chameleon and Maximus the horse, as well as newcomer Cassandra, a tough-as-nails handmaiden.

The original Tangled movie debuted in the US over Thanksgiving in 2010, with a US$68.7 million opening. A box-office success for Disney, the film went on to gross US$200 million domestically and more than US$593 million globally. Tangled Ever After, meanwhile, debuted on Disney Channel in 2012 garnering five million total viewers, with 2.6 million kids two to 11 and 1.4 million adults tuning in for the animated short.

On the consumer products side, Rapunzel is one of the top-selling role-play dresses at Disney Store locations, and has a merchandise line that includes toys, apparel and books.