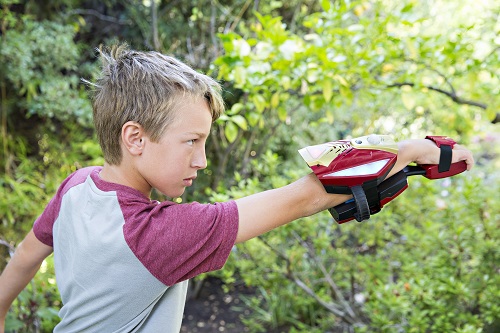 Marking a big leap in connected play products, Disney Consumer Products has rolled out Playmation, a toy line that blends physical and digital play using smart toys and wearables in a new way.

Marking a big leap in connected play products, Disney Consumer Products has rolled out Playmation, a toy that blends physical and digital play using smart toys and wearables in a new way.

The new toy line, which gets kids to use their imaginations by incorporating physical play with new tech, will roll out at US and Canadian mass and specialty retailers this October. DisneyStore.com will offer pre-orders starting July 7.

Playmation is also a joint effort from DCP and Hasbro. The two companies collaborated on physical product design and manufacturing for the toys.

First up is a toy line based on Marvel’s Avengers. The Playmation Marvel’s Avengers Starter Pack (SRP US$119.99) contains five connected toys, including one piece of wearable Avenger Gear (Repulsor) and two Power Activators. There will also be two Smart Figures, a superhero (Captain America) and a super villain (Iron Skull). To allow for more outdoor play, the toys do not need an internet connection to run.

Also available at launch will be the  AvengersNet app, where users can register their Avenger Gear to track their progress and find new locations, characters and missions.

Star Wars and Disney Frozen systems are also currently in development for 2016 and 2017, respectively. Each will use a range of technologies to create a system based on the different ways that kids play and experience their favorite stories and characters from each franchise.

Playmation is the culmination of years-long research at Disney into how kids play. It was developed by a team of technologists, Imagineers and employees from across the company.

According to Disney, the toys fit with a generation of parents that feel nostalgia for the way they used to play growing up, and who also have a desire to keep their kids active while still using technology.

A third-party online study of 2,000 families in the US, comissioned by the House of Mouse, found that while almost all parents believe in the power of active and creative play, they believe technology is also an important part of growing up in today’s world. Nine out of 10 parents are open to new technology that could play a role in keeping their children active.