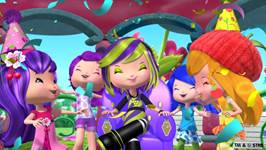 Season four of Strawberry Shortcake's Berry Bitty Adventures will feature three new characters when it premieres June 20 on Discovery Family Channel in the US.

There will be three new faces—twins Sweet and Sour Grapes, and Apple Dumplin’—on the fourth season of Strawberry Shortcake’s Berry Bitty Adventures, which will premiere June 20 on Discovery Family Channel in the US.

Timed with the brand’s 35th anniversary, the all-new season of 13 x half-hour episodes addresses everything from technology, world travel and storytelling, to cooking and fashion through the escapades of Strawberry Shortcake and her host of friends new and old.

Strawberry Shortcake first debuted on TV in the 1980s and was relaunched as an animated series from DiC Entertainment in 2003. The third iteration launched in 2010 and is co-produced by Iconix Brand Group, which acquired the franshise in February, and American Greetings Properties.