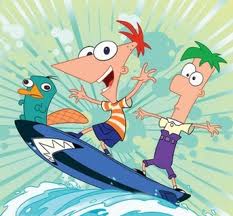 Povenmire and Marsh are the creators and executive producers of the show. Joining them are Phineas and Ferb colleagues producer and director Robert F. Hughes, story editor Scott Peterson and staff writers Joshua Pruett, Dani Vetere and Martin Olson.

The news comes as the team wrapped production on Phineas and Ferb. The final new episode, entitled “Last Day of Summer,” is slated to premiere on Friday, June 12 at 9:00 p.m. on Disney XD, simulcast on the Disney Channel. Preceding the hour-long ep will be a 73-hour marathon, starting June 9, in which every Phineas and Ferb episode will air before the final new title.

Following the marathon, the series will continue to air daily on Disney XD and Disney Channels worldwide.

Phineas and Ferb is ending after 126 episodes, five one-hour specials and a Disney Channel original movie. The series has won three Emmy Awards, one for Outstanding Writing in Animation (2010) and two for Outstanding Individual Achievement in Animation (both in 2011) and nine Emmy nominations. Additionally, the series received multiple BAFTA and Annie Awards nomiations.