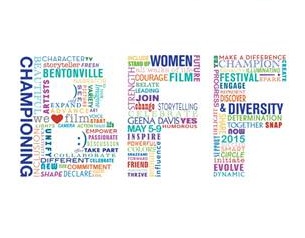 Championing women and diversity in film, the inaugural Bentonville Film Festival will take place from May 5 to 9 in Bentonville, Arkansas.

A new family-friendly film festival from Geena Davis and Arc Entertainment is set to champion women and diversity in film. The inaugural Bentonville Film Festival will take place from May 5 to 9 in Bentonville, Arkansas.

Billed as the first and only film competition to offer its Audience, Jury Selection and Best Family Film winners guaranteed theatrical, television, digital and retail home entertainment distribution, the event will see 75 films screened, ranging from studio premieres to independent features and documentaries.

The agenda includes an event series called Geena and Friends, re-imagining some of the greatest dialog in the history of cinema. O’Donnell will be among the participants, and is also set to take part in the festival’s In Control of Her Own Destiny panel, featuring female celebs who manage their own film production companies.

De Niro, meanwhile, will headline a discussion series to complement a screening of Remembering the Artist, the documentary about his father (Robert De Niro Sr.).

The festival is also running a brand-new feature film screenplay competition, dubbed “the Dernsie,” supported by actor Bruce Dern, who will present the winner with an award, US$1,500 and a potential 18-month option of the script with Kickstart Productions.

Rounding out the list, Cannon and O’Brien will co-host the closing night awards show.

The Bentonville Film Festival is hosted by ARC Entertainment, Walmart, Coca-Cola and AMC Theaters, and chaired by Geena Davis, with the Geena Davis Institute on Gender in Media as the official nonprofit partner of the festival.

Winners of the festival’s Audience, Jury Selection and Best Family Film awards will receive a distribution agreement with a traditional theatrical release, on at least 25 screens, from AMC Theaters.