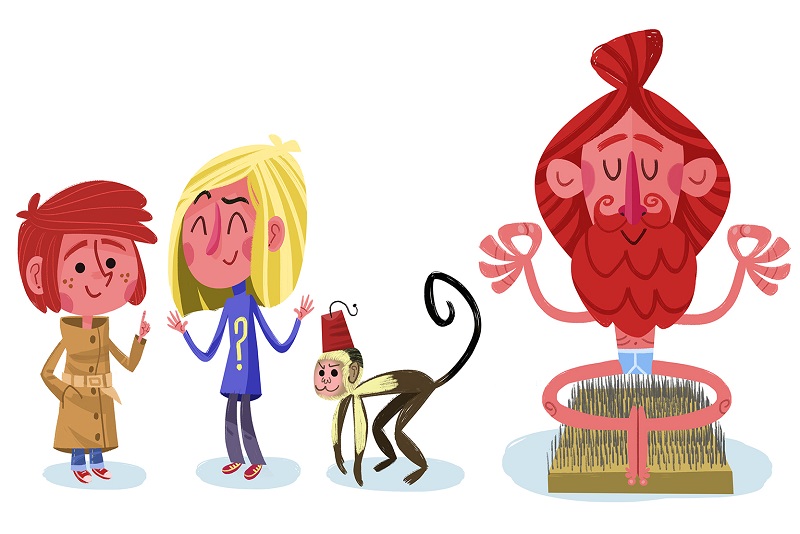 Kavaleer founder and CEO Andrew Kavanagh recently unveiled the groundbreaking new IP, Dougie Noir, at iKids in Miami to an industry audience intrigued by the property’s potential to educate, entertain and engender health and wellness.

Kavanagh’s got the idea for Dougie Noir during development phase of another Kavaleer project, 2D-animated, STEM curriculum-based series Kiva can do!

“It focuses on creativity and innovation, and how both math and visual aptitude are essential for kids who hope to be the innovators and inventors of the next generation,” says Kavanagh. “The show’s stories merge these areas, which up until recently, had been viewed as mutually exclusive.”

In researching inventors, Kavanagh says he became aware of how many game-changing artists and scientists would fall into the autistic spectrum had modern diagnostic techniques been in practice during their lifetimes.

Then in January of 2014, he met Cortechs CEO and neuroscientist Áine Behan, who introduced Kavanagh to the developer’s brainwave-reading software that uses EEG technology to improve focus and reduce stress.

“She showed me the software she was developing to help kids with ADHD. I instantly saw the benefits of marrying this with animation, so I began working on an outline for a character to explore this world through,” says Kavanagh.

That character became Dougie Noir, a high-functioning eight-year-old kid detective around which Kavaleer could build a TV series, a suite of game apps and digital “choose your own adventure” storybooks.

Kavaleer and Cortechs brought mobile video platform VBOT into the mix. The trio then went to work incorporating Kavaleer’s tailored content with Cortechs’ assistive technology to produce a unique mobile game experience that tracks a player’s neural activity in real time with a Bluetooth headset.

Kavanagh says because Cortechs developed its EEG-driven features within an Android app, Kavaleer expects to release the first Dougie Noir game on the Google Play store for Android devices, with Bluetooth support, in Q3.

To better understand how the tech and gameplay mechanisms come together, Kavanagh breaks it down in simpler terms. “We monitor the user’s mental state of alertness and stress to exploit gameplay mechanics, methods and thresholds within the Unity Pro game platforms,” he says. “A wearer’s brainwave activity can elicit a command or make choices within a story.” He adds that brainwaves in the app are represented visually on the screen of a tablet or smartphone through animation.

“From an educational perspective, we can set thresholds to reward the child or adult for changes in behavior like sustaining focus within the game.” For example, the first game app could feature Yoga Matt, a character from the 52 x 11-minute Dougie Noir 2D-animated TV series that’s currently in development. By simply calming the mind, users could help Matt attain a level of enlightenment and also make him levitate. “The more you relax and focus, the more you will be rewarded for it in our game. And a higher ‘state of zen’ can be achieved with continued game sessions,” says Kavanagh.

As Kavaleer and its partners work toward their first app launch, the TV series is also moving forward.

With an expected delivery date of late 2017, the show follows the adventures of main character Dougie, who would rather focus on a career as a kid detective than follow in the footsteps of his mom, dad and peers—all performers in the family-run big top show Cirque Énigme.

After introducing the IP to broadcasters at Kidscreen Summit, Kavanagh says Cartoon Network, Hop and Disney all showed interest and there is developer support growing on the interactive side, too.

With the first pieces of the IP coming together, Kavanagh is also excited by potential crossover opportunities in the wearables and smart TV markets. “We’re building a new way of consuming media for kids who have traditionally been ostracized by the mainstream,” he notes.