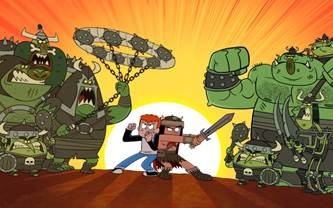 Production has begun on the 52 x 11-minute animated series, which is based on the popular graphic novel Fangbone: Third Grade Barbarian by Michael Rex.

Fangbone! tells the story of a young warrior from Skullbania, who travels through a magical portal into the suburbs of the real world, landing in Eastwood Elementary School. His mission is to protect the blackened big toe of Venomous Drool from being reunited with its evil sorcerer master.

The show’s pilot, which premiered last May on Disney XD Canada, just received the 2015 Kidscreen Award for Best One-Off, Special or TV Movie in the Kids category.

This commission builds on an existing relationship between the companies, as Radical Sheep and DHX Television have partnered in the past on Stella and Sam, airing on Disney Junior, and preschool series Yup Yups.