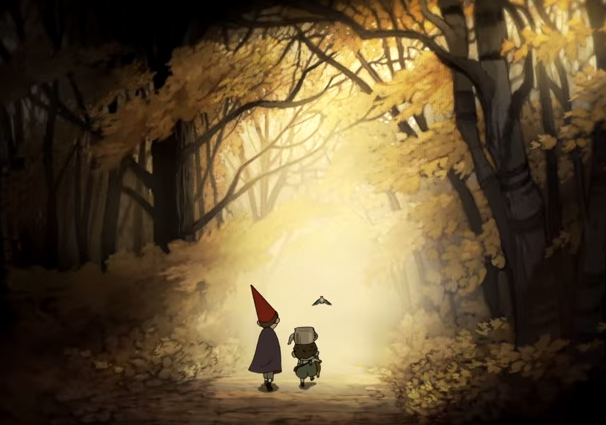 From the mag: Cartoon Network talks about how it went about making its first-ever miniseries, and event-viewing hit, Over the Garden Wall.

In its more than 20-year history, Cartoon Network has proven it’s not afraid to take calculated risks by launching incredibly original programming like Adventure Time and Steven Universe. But this past fall the studio unveiled a new project unlike anything it’s made before.

Over five consecutive nights from November 3 to 7, the US network aired its very first miniseries, an original 10 x 11-minute comedy/fantasy toon called Over the Garden Wall from the former creative director of Adventure Time, Patrick McHale.

The pre-holiday, primetime animated event for kids and families is based on an acclaimed short film McHale made for Cartoon Network in 2011 entitled Tome of the Unknown. It follows the adventures of two brothers, Wirt and Greg, who find themselves trapped in a strange forest world and must find their way home.

With dark undertones, folk art inspiration and a soundtrack of Americana-influenced original songs by L.A.-based band The Petrojvic Blasting Company, Over the Garden Wall creates a mood and experience designed to evoke feelings of nostalgia in older audiences raised on classic children’s storybooks of the 1800s and timeless fairytales. It also features an all-star voice cast led by Elijah Wood (Lord of the Rings trilogy) as Wirt and Collin Dean (The War At Home) as Greg, plus enough quirky humor and adventure to satisfy today’s kids.

The miniseries’ unique style even carried over to the show’s promotional materials, which included a “Read and Listen” storybook with an accompanying 45-inch vinyl record.

Cartoon Network CMO Michael Ouweleen says the studio took a chance with the production, but felt secure enough in McHale’s vision that it didn’t feel completely reckless. “It felt novel and that’s when we are at our best,” he says.

From the moment McHale first pitched part of a storyboard sporting the same red cone hat and blue cape worn by protagonist Wirt, Ouweleen knew the project was special. “The texture of the storyboard alone was so different from anything else on the wall at the time,” he says.

Although the network didn’t know exactly what to do with the project at first, McHale worked closely with Cartoon Network’s chief content officer Robert Sorcher to shape the concept.

“Even though it was a weird project, Cartoon Network was very supportive,” says McHale. “It was always intended to be a pilot for a TV series, but it never seemed like the kind of show a network would expand into a lot of episodes. I thought about making a miniseries with it, so when Cartoon Network actually offered it to me that way, I was thrilled.”

Getting audience buy-in
Once it was determined that Over the Garden Wall would be a brand-new format for Cartoon Network, the studio’s in-house agency, Creative Group, went to work on a promotional strategy to ensure the audience would tune in.

“The biggest marketing challenge was figuring out how to talk about this new kind of show with our audience, because a miniseries doesn’t mean anything to them,” says Ouweleen. “Two years of work was going to be televised over five nights and then be gone—we had to get people there.”

The strategy, according to Ouweleen, took shape with on-air promos that invited parents and kids to start a new kind of pre-holiday couch moment that could potentially translate into the kind of annual holiday viewing event that surrounds movies like The Wizard of Oz and The Sound of Music.

Another on-air promo idea, initiated by Creative Group’s creative director Larry Morris, appeared at the end of each night’s episode and used the conceit of an open-book graphic teasing the next chapter of the story.

Cartoon Network took the plan further by working in tandem with McHale across the entire marketing process. “We generally try to work with show creators probably more than other networks in terms of how we launch programs,” says Ouweleen. Calvin Florian, Creative Group senior production manager, adds that McHale offered to help create the promotional material and give direction related to key art. “From the beginning, Pat was very gracious with his time,” says Florian. “Having been on Adventure Time, he knew what needed to be done to make things better. And he paid incredible attention to detail.”

As for the creation of the series’ “Read and Listen” storybook and vinyl record, Morris says the idea was developed in a meeting with McHale. “If you close your eyes, the story sounds like an old-time radio show, so someone suggested we could make a “Read and Listen” book. Then we went out on a ridiculous limb and made a vinyl record,” says Morris.

Ouweleen credits the collaborative approach with McHale, who wrote the record’s content and helped write its songs, as a key reason for the press kit’s success. “It also worked because the team viewed the record as a content extension of the show and not necessarily as a piece of marketing,” he says.

Format challenges
For McHale, working on his first miniseries involved a couple of big challenges. “One, it felt like writing a feature film and a TV series at the same time,” he says. “I had to make sure each episode had its own arc that was satisfying and different, and that came to a complete end. But at the same time, I had to keep track of the overall arcs and get the characters where they needed to be by the end of the series.”

The second challenge for McHale presented itself on the production side. “Because it was such a short-term project, it was very hard to get full-time, in-house staff,” contends McHale. “We got some of the most talented people in the industry to work on the show, but we had to do a lot of freelance. It’s also always hard to do a traveling show with completely new characters, backgrounds, color schemes, etc. in every episode—that was a lot of work.”

Despite the challenges, Cartoon Network’s decision to try something completely different paid off in the end. Over the Garden Wall reached a total of 4,277,000 viewers ages two and up. It also averaged more than two million kids two to 11, and according to Ouweleen, its ratings grew with each new episode—especially towards its finale.

“It means people either didn’t find it hard to enter mid-week, or they were coming back every night, or a combination of the two,” says Ouweleen. “It’s definitely encouraging for the studio to see it work, and I would be amazed if we didn’t bring it back next year.” He also sees streaming opportunities for the miniseries. “It will certainly find a life as a bundle—either on our platform or our partners’ platforms—because it lends itself to binge- viewing. That’s what we were trying for.”

Cartoon Network, Over the Garden Wall