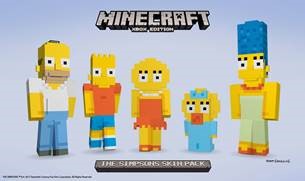 The Simpsons enter the Minecraft universe

That didn't take long. Just a few months after the closing of Microsoft's US$2.5-billion purchase of developer Mojang, licensed characters will be entering the world of Minecraft for the first time.

That didn’t take long. Just a few months after the closing of Microsoft’s US$2.5-billion purchase of developer Mojang, licensed characters will be entering the world of Minecraft for the first time. Add-on content packs for Xbox versions of the game featuring The Simpsons are hitting the market in late February.

Homer, Marge, Bart, Lisa and Maggie, along with 19 other characters from Springfield Elementary, will soon be reborn as fully textured, cubic characters featured in downloadable Minecraft content packs, for the Xbox 360 and Xbox One, priced at US$1.99 apiece. The console’s content hub Xbox Live currently has an active community of 17 million Minecrafters.

The deal was forged between The Simpsons’ property owner Fox Consumer Products and Xbox.  Minecraft  has been downloaded more than 100 million times - across all versions including PC, mobile and console - since its 2009 launch.

Minecraft, The Simpsons, Xbox 360, Xbox One