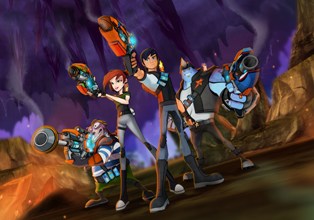 The deal sees successful kids properties such as Slugterra (pictured) come under the DHX umbrella.

DHX Media’s footprint in Canada officially got larger today, as it announced the completion of its deal to acquire Vancouver-based Nerd Corps Entertainment.

Announced earlier this month, the deal sees kids and family-focused DHX acquire the animation studio for US$50 million. Nerd Corps is behind successful kids properties such as Slugterra and League of Super Evil.

The deal expands DHX’s presence in Vancouver, adds over 200 half-hours of kids content to its library and enhances its gaming and mobile capabilities.

The Nerd Corps acquisition is the latest of many for Halifax-based DHX Media, which has in the last two years, acquired Cookie Jar Entertainment, Ragdoll Worldwide and Degrassi producer Epitome Pictures. This year, DHX also acquired the Family Channel and three Disney channels from Bell Media.