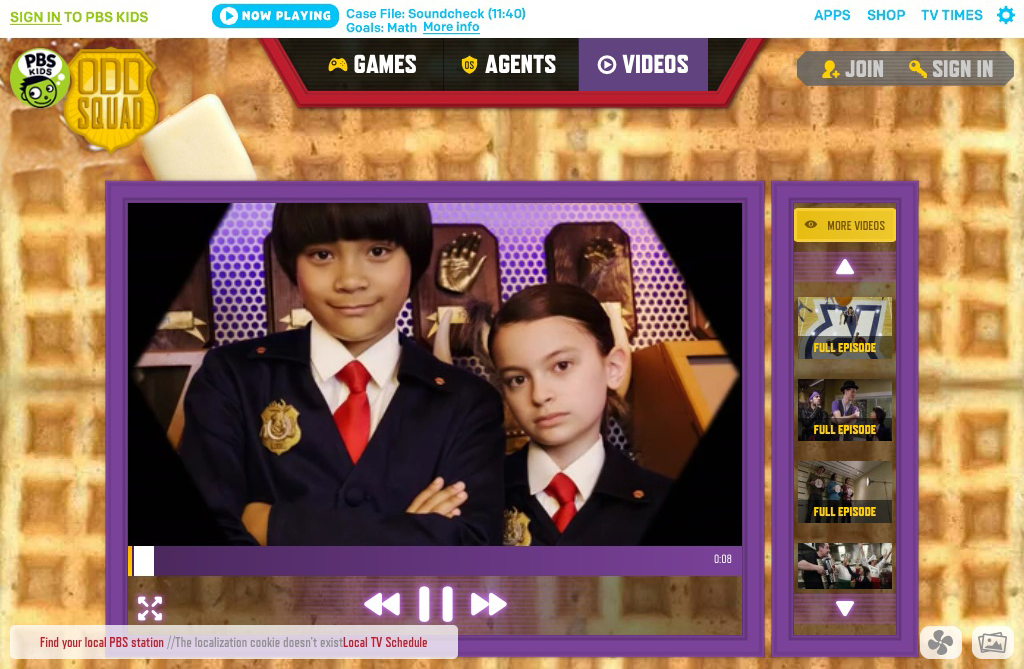 In a continued commitment to roll out its content across multiple platforms, PBS KIDS is launching a collection of digital products for new live-action series Odd Squad one month prior to the show’s US broadcast debut as a one-hour special on November 26.

Starting today, kids can access Case Files—full-length videos from the show—on the new Odd Squad site, marking the first time PBS KIDS has ever made this much full-length content available to viewers before a series’ channel premiere.

“What we’re seeing with kids especially is that they’re consuming more and more content on digital devices, be it tablets, over-the-top or what have you,” says Ira Rubenstein, GM of PBS Digital. “This is really an opportunity to get the content out there and get people talking about it and excited about it.”

Along with six 11-minute Case Files, additional digital content includes agent profiles, games and training videos, and all will be made available on pbskids.org, the PBS KIDS Video App, and PBS Kids on Roku, Apple TV, Chromecast and Amazon Fire.

“When PBS is looking at a new show, we’re always looking at the digital component for that show, what the online component’s going to be, and how do we have original and new content that ties in digitally,” says Rubenstein. “We see at PBS that it’s a multimedia effort now.”

The new digital content builds on PBS KIDS’s existing strength in the multiplatform space. According to comScore, PBSKids.org has been the top-ranked kids TV network site for multiplatform traffic every month in 2014.

“We have a saying here that ‘more is more,’” says Rubenstein. “The more content we put out digitally leads to more views on TV, as well.”

The digital push won’t end with the TV debut. Following Odd Squad‘s premiere, new content will continually be added to its dedicated website.

Likened to Men in Black for kids, it follows agents Olive and Otto, who are part of the Odd Squad, an agency responsible for saving the day whenever something extraordinary happens. Each case requires the dynamic duo to solve a math mystery to put things right.