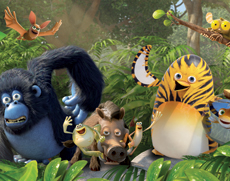 Jungle Bunch swings to Boomerang in Europe and Asia

Commissioned by France Télévisions, the new 52 x 11-minute season is based on original movie The Jungle Bunch: Back to the Ice Floe.

The Jungle Bunch season one follows the comedic adventures of a penguin, a tiger and a gorilla and was developed by both Super RTL and France Télévisions. It currently airs in more than 180 territories on broadcasters such as France 3, Rai, TVE and ABC Australia.