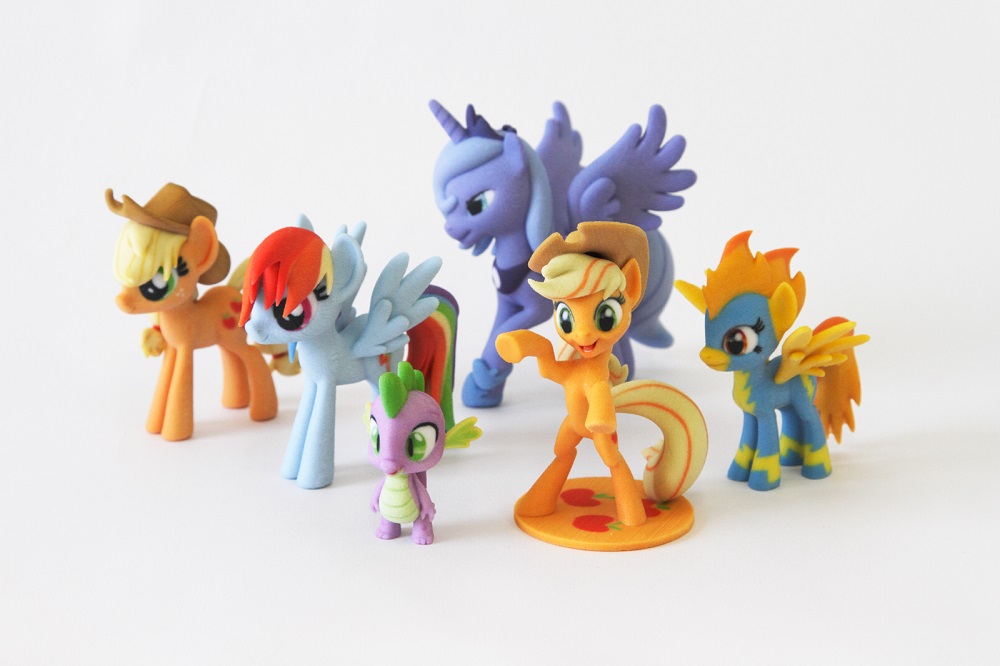 From the mag: Hasbro ratchets up user-generated licensing efforts

From spinning fan-fiction to 3D printing, Hasbro has met with success in letting fans dabble in product creation.

It may sound a little young, but Brandon Lee Johnson was six years old when he started 3D modeling at home. A gamer at heart, the boy from Oshawa, Canada used freeware programs to develop his skills in computer programming, never thinking he could one day bring his creations to life. But four years ago, Johnson (now 17) discovered the 3D printing marketplace Shapeways, where he started to design printable figures based on one of his favorite TV shows—My Little Pony: Friendship is Magic. And he wasn’t the only one.

Others on the site were making their own My Little Pony figures, too, well before licensor Hasbro had cottoned onto 3D printing. But the toyco did eventually take notice. “And instead of saying, ‘You can’t do this. Stop. Get me a cease-and-desist,’ [Hasbro] said, ‘Let’s figure out a way to do this so that everybody gets a piece of the action,’” says Duann Scott, a designer evangelist (yes, that’s his real title) with Shapeways.

Hasbro teamed up with Scott’s company this summer to launch SuperFanArt, a new site where selected artists can market and sell their 3D creations. Marquee franchise My Little Pony led the way, and Johnson was among the first five designers picked to create printable figures. His sandstone figure of Pinkie Pie, for example, can be purchased for US$45. SuperFanArt is now looking for potential artists to create 3D-printable designs for Transformers, G.I. Joe, Monopoly, Dragonvale, Scrabble and Dungeons & Dragons.

The one-off revolution
User-generated content was all the rage back in 2006, when the early days of YouTube and user-friendly editing software helped give exposure to amateur singers and video directors. For fans of kids brands, however, there was a wall preventing the manufacturing of user-generated toy designs. “Every SKU, by its very nature, would be a one-off, making it impossible to achieve any kind of economy of scale and enter the mass market,” Kidscreen wrote of user-generated licensed products in 2007. “And it might never work for large, long-established properties that simply have too much to lose in letting any possible inappropriate fan-designed product into the market.”

Fast forward to 2014, and that wall is starting to crumble. “The power of 3D printing is that there is no minimum order or minimum run,” Scott says. “Supply exactly meets demand.” Companies can test out new designs that may not sell enough to warrant securing shelf space at physical retailers. “They could just print 500 or 507 or 23,” Scott adds. “That untapped market can be tapped and there’s no cost.”

And while 3D printing is the latest toy-changing tech, it is not the only one to expand UGC potential. Look at online reading, which has led to a surge of fan fiction. The challenge for many brand owners with such content, however, is letting fans explore new dimensions and storylines of their properties without having the product go entirely off-brand.

Earlier this year, Hasbro also signed a deal to let fans create and sell G.I. Joe fan fiction on Amazon’s Kindle Worlds. To keep things in check, Hasbro and Kindle Worlds published a set of content guidelines for users to follow. The 16 rules range from forbidding anything offensive (no pornography, illegal drug use or offensive language) to any mixed branding, including putting third-party IPs or real-life characters in the narrative. “We were in a good position to allow people to play in our sandbox without letting them kick sand in anybody’s face,” says Michael Kelly, Hasbro’s director of publishing. The result has been some compelling storytelling from people who are most passionate about the brand, Kelly adds. “One of my favorite things is when you see a new character that someone has come up with in their minds and it works really well.”

Ready or not, here they come
Even if licensors are not ready to enter into the largely unchartered world of user-generated licensing, it does not necessarily mean their reluctance will curb the demand—or supply—from fans. The lines of copyright for 3D printing, for example, are somewhat blurred. Last year, Tintin IP owner Moulinsart served the 3D design community Thingiverse with a lawsuit, demanding it remove a printable design based on Tintin’s rocket ship. The site took the design down, but pretty soon another user uploaded a modified version of the rocket. Like many musicians who sued websites that shared their music in MP3 format, it did nothing to stop people from downloading music for free. It just created ill will between the music industry and fans. And just as CD burners became ubiquitous, 3D printers are poised to be the next industry disruptor.

Sales for consumer-ready 3D printers will surpass a million units by 2018, according to a recent report from UK-based Juniper Research—a dramatic increase from the estimated 44,000 sold this year. The research firm is also forecasting that 3D printer sales for hardware and materials will exceed US$1 billion by 2018, while this year’s sales will hit around US$75 million. And the future of printing won’t be solely for teens or adults.

Printeer, a Kickstarter-funded 3D printer, is built for kids and designed to use the non-toxic plastic material PLA. Its Kickstarter campaign more than doubled its target, generating US$117,000 in donations, but that doesn’t mean brick-and-mortar stores have to fear the 3D printer just yet. These entry-level household printers are unlikely to offer the same quality, variety or materials that factory-grade printers do. But they are trying to catch up. “The material palette is evolving very quickly,” Scott says. “We started out six years ago with one material, an ABS plastic. Now we have 48 options.” That includes stainless steel, ceramics, sterling silver, brass, bronze, gold and silver.

Make it easy
Even if the selection of materials expands exponentially, there is still the problem of regular fans designing toys in the first place. Johnson says creating a 3D-printable model based on My Little Pony might take him eight hours—a fairly big time commitment for the average kid. To boot, most fans aren’t 3D-modeling experts and can’t create viable products. As a result, their toys are still confined to the imagination of those trained to create them.

Toyze has jumped in with a 3D-printing toy creator app, where users can customize poses or add accessories to their own characters, or those from the app games Pou! or Cut the Rope. The iOS and Android app is free to download, but the cost to print and ship the product (depending on the size) is around US$50. It’s a steep price for customers, but it is their own one-of-a-kind creation.

As similar toy printing apps expand with licensing deals and better technology, the next question for fans might be, “Do you want G.I. Joe with the car, the rocket launcher, the crossbow or the gun? And you’ll say ‘I want the crossbow,’” Scott says. “You won’t know that it’s printed. You’ll just know it’s what you wanted.”