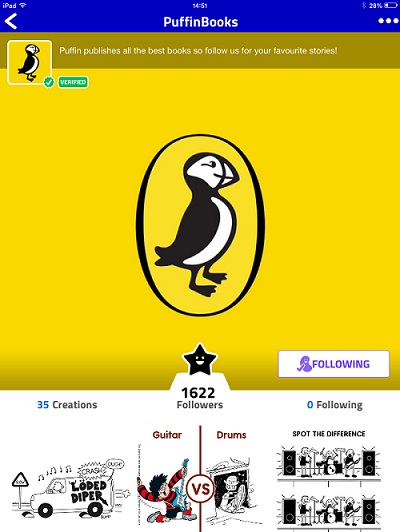 Mindy Candy has scored a publishing partnership for its PopJam app with Penguin Children's imprint Puffin.

Introduced earlier this year in the UK and Australia, PopJam is billed as a safe and creative community for kids. Similar to Instagram, it has a public feed of shared photos.

Following the deal, Puffin will be the app’s first publishing partner. It gets a channel on the app (pictured) where kids can read a range of Puffin titles including Diary of Dennis the Menace, The Worst Witch, Cathy Cassidy’s Chocolate Box Girls and Richard Adam’s Watership Down. The partnership helps put books in front of kids on their preferred platforms—which are increasingly mobile.

The app is the latest initiative from Mind Candy, the company behind the Moshi Monsters gaming phenomenon that has over 80 million registered users, a merchandising program and a movie in the works. Most recently, the company announced that its CEO and founder Michael Acton Smith would be stepping down to pursue a more creative role in the company.