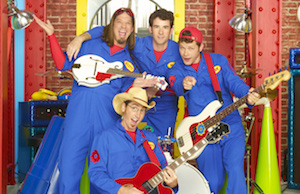 The Toronto-based indie producer is planning an animated TV series based on the musical group that currently stars in Disney Junior's Imagination Movers.

Toronto, Canada’s 9 Story Entertainment is developing a new animated series based on Imagination Movers, the group of four musicians who have their own live-action show of the same name on Disney Junior.

The development deal with the musical act – which is also known for its live stage shows – is for a planned TV series called Super Movers, aimed at four to sevens and combining comedy, adventure and music.

Super Movers will see characters based on musicians Rich Collins, Scott Durbin, Dave Poche and Scott Smith with superpowers that teach young TV viewers they have inner abilities of their own.

The development deal was announced by Natalie Dumoulin, VP of creative affairs for 9 Story Entertainment.

Disney Junior’s Imagination Movers aired for three seasons and 75 episodes. It was not renewed for a fourth season.