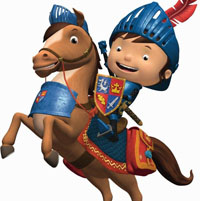 Notably premiering on digital first, Mike the Knight: Journey to Dragon Mountain will be available to HuluPlus subscribers until October 13. A month after the Hulu premiere, NCircle plans to release the film on DVD (October 14).

The direct-to-DVD feature is a co-production between HIT Entertainment and Corus Entertainment-owned Nelvana Studio. It’s based on the animated preschool series Mike the Knight,, season one of which was sold to 27 broadcasters in 112 countries worldwide. Along with the show, the franchise includes a Fisher-Price toy line and Mike the Knight apps.

As a result of NCircle announcing an exclusive pact for kids content with Hulu earlier this summer, the young knight already has a number of titles on Hulu, including Knight in Training and Magical Mishaps.

The film is the latest kids property to go on-demand with Hulu as the American SVOD service continues to build up its children’s programming.