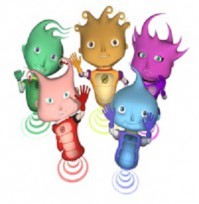 New CBeebies series Nina and the Neurons: Go Digital is one offering, among many aimed to educate UK kids about computers and coding, from the new cross-platform program initiated by BBC Children's and BBC Learning.

While 2014 marks the “Year of Code” for the UK, BBC’s latest children’s content offerings ensures the progress won’t shut down anytime soon. BBC Children’s and BBC Learning unveiled an array of new computer and coding content targeting kids, ranging from educational resources and TV series to games and competitions.

To coincide with England’s new computing curriculum across primary and secondary schools, BBC Learning will update BBC Bitesize to work on tablets, phones, PCs and whiteboards. The program will use study guides and quizzes, to cover content that includes, programming, animation, algorithms and computer games.

CBBC also unveiled two new series with a digital focus. Coming this fall, Appsolute Genius follows Dick and Dom as they learn about those who shaped the world of coding, gaming and computer programming.  Some of the people they come across in the show include the animators of Sonic the Hedgehog, Pong and Pac-Man. As part of the series, a competition challenges young designers to build a game, where the winner gets the chance to have his or her idea released as an app.

Also coming this fall is Technobabble, a futuristic technology series that looks concepts like virtual reality and space travel, as well as reviews the latest in apps, games and digital feats.

For younger audiences, ages four to six, CBeebies is launching the new series Nina and the Neurons: Go Digital. Made by the CBeebies Scotland team, Nina is aided by her five neurons, Luke (sight), Felix (touch), Belle (hearing), Ollie (smell) and baby Bud (taste). Together, Nina and her experimenters learn about technology like the internet, coding, animation, driverless cars and 3D printing.