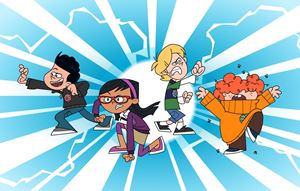 Teletoon Canada and Cartoon Network US have snapped up the latest animated comedy from DHX Media.

DHX Media has started production on Supernoobs, a 2D-animated core-kids comedy commissioned by Teletoon Canada and acquired by Cartoon Network US.

The series, aimed at kids six to 11, is being produced by DHX’s Vancouver studio.

Supernoobs, created by Scott Fellows (Johnny Test),  portrays the Super-Tastic-Supernoobs amid the evils of the universe and the evils of adolescence.

DHX Media has the worldwide TV, licensing and merchandising rights, excluding the Canadian and US broadcast rights.