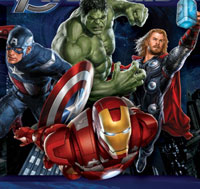 The Avengers and Hulk smash into second seasons on Disney XD

The animated shows are top performers during the Marvel Universe block.

Disney XD ordered a second season of Avengers Assemble and Hulk and the Agents of S.MA.S.H. for its Marvel Universe programming block.

Avengers Assemble has hit 699,000 total viewers this year to date, making it the top ranked animated series on Disney XD. Season two will bring back Iron Man, Hulk, Captain America, Hawkeye, Thor, Black Widow and Falcon as they combine their superpowers to defeat the warlord Thanos.

Hulk and the Agents of S.M.A.S.H., meanwhile, has reached 480,000 total viewers so far this year on the Disney XD.