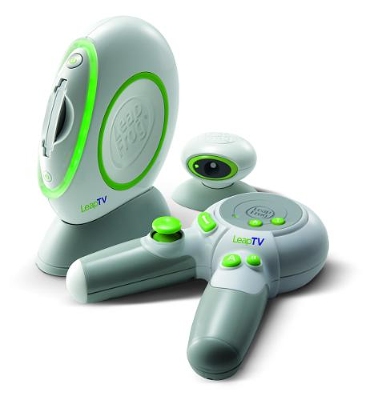 Will education-based gaming be a hit with kids? LeapFrog is banking on it.

LeapFrog is introducing its new learning platform LeapTV, a video game system designed specifically for three- to eight-year-olds. Made for smaller hands, the  gaming system has both educational and active gaming.

The console is made specifically for little kids who sometimes have difficulty using adult-sized controllers or playing games designed for an older demographic.

LeapTV comes with a digital library of over 100 educator-approved video games and videos. The gaming system takes a different approach to kids learning, combining activity and exercise with educational curriculum.

The console is priced at US$149.99, and is slated to hit major retail locations for this year’s holiday season.

The new controller (pictured) allows for classic gameplay and LED pointer play. The system also features a motion-sensing camera that puts kids directly in the game.

LeapFrog is aiming to make LeapTV the first video gaming experience for younger kids, based heavily on educational games. Its library of  content teaches a range of skills across reading, mathematics, science and problem solving. The games are designed by LeapFrog’s team of experts specifically to help kids learn.

In other LeapFrog news, the company debuted its LeapBand earlier this year. The band keeps track of kids’ activity and fitness, while also including educational elements.

With the LeapBand and now LeapTV, the company is hoping to boost its 2014 sales. Its first quarter 2014 net sales were US$56.9 million, down 31% compared to US$82.9 million in 2013. LeapFrog attributes this to last year’s tablet popularity, with a high post-holiday demand for its LeapPad tablets. With these new product launches slated for the second half of the year, the company expects sales to be more back-end focused in 2014.