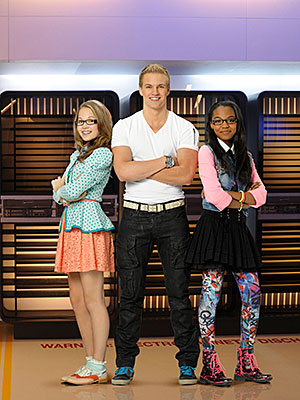 The Disney Channel original premieres at 8 p.m. on Friday, August 15.

In the movie, McClain and Berglund play tech whizzes who computer-program the perfect boy, triggering a national incident in the process.

How to Build a Better Boy is is a production of Princessa Productions and Schorr Pictures. It’s directed by Paul Hoen (Let It Shine, Camp Rock 2: The Final Jam), and executive-produced by Adam Kossack and Robin Schorr (Food, Inc., The Pretty One).

As with previous Disney Channel originals, the multi-platform schedule includes a premiere on August 11 for WATCH Disney Channel users. In addition, on July 15 kids can go to DisneyChannel.com for a How to Build a Better Boy game.

It’s worth noting that this latest movie, How to Build a Better Boy, is about two girls who excel at science and math. As the topic of girls and STEM gets more popular, we might be seeing more STEM-related movies and TV shows hitting the airwaves.