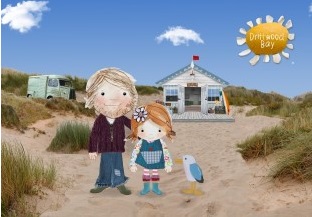 The deal covers the UK and Ireland.

The mixed-media series follows the adventures of six-year-old Lily, who lives with her father in a hut on the beach. It is based on an original idea and characters from artist Joanne Carmichael.

Since premiering on Nick Jr. in the UK this May, the series has been watched by more than 1.5 million viewers. In addition to Nick Jr. UK, the series airs in major countries worldwide.