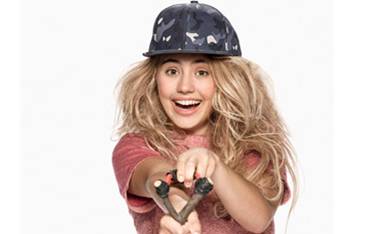 YouTube star Lia Marie Johnson, 17, is bringing her AwesomenessTV character Terry the Tomboy to Nickelodeon in a TV movie.

Nickelodeon has revealed that 17-year-old YouTube star Lia Marie Johnson, who plays Terry the Tomboy in a series of AwesomenessTV digital videos, is bringing the character to television.

A movie titled Terry the Tomboy will premiere on the network next Saturday, June 21.

Johnson’s YouTube channel has more than 900,000 subscribers and 47 million views. In addition to her work with AwesomenessTV, she has starred in the Emmy-winning web series Kids React, Teens React and YouTubers React.