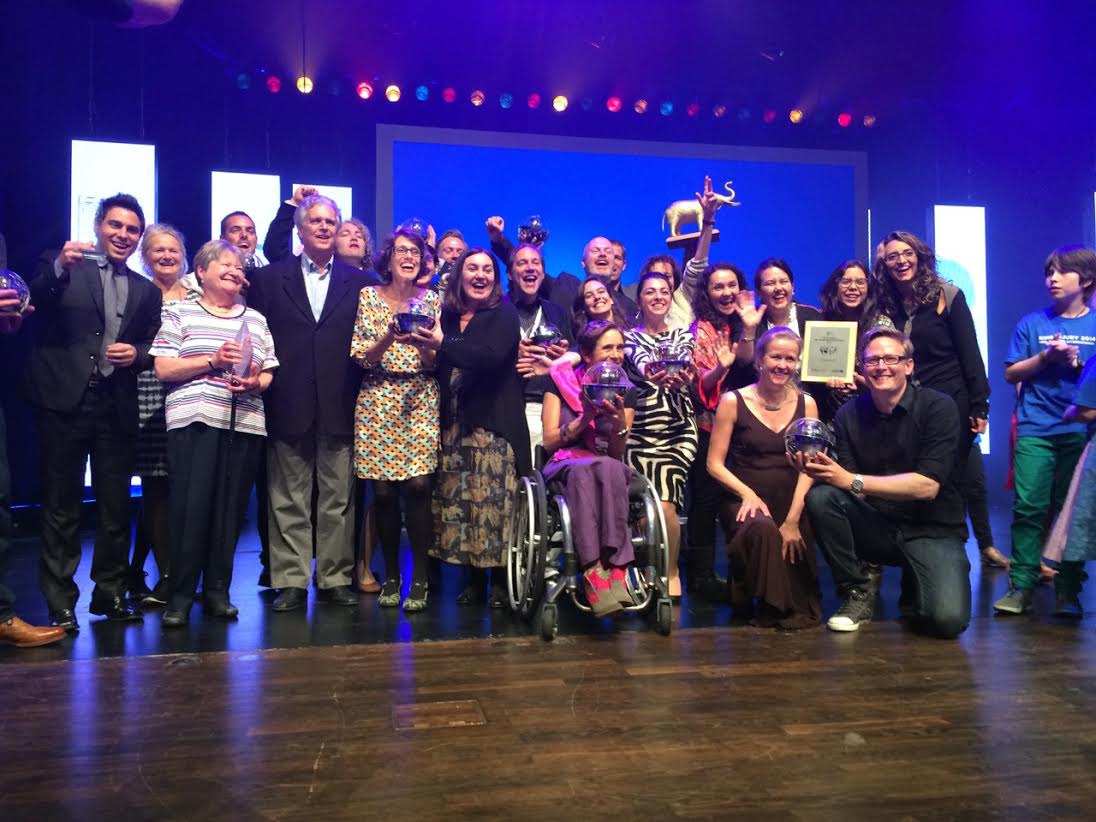 What we can take away from Prix Jeunesse 2014

This blog is usually devoted to bridging the gap between industry and academia. Therefore, since it affects both theory and application, I'll share thoughts that emerged from this year's Prix Juenesse about best practices in the area of emotional literacy.

Last night, the 2014 international children’s television festival, Prix Jeunesse announced its winners with an ele-fantastisch ceremony. It capped six Geneva Convention-challenging days, screening and discussing 92 children’s programs and six interactive projects from around the world. It wasn’t all “screen time:” lunches and evenings offered presentations on research around “emotions and children’s media” (the 2014 overall theme) and celebrations like the Nordic Karaoke Party, NHK’s Japan Prize Evening, and the CBBC party with a unique pub quiz (format available for sale).

This year, I served as moderator of the moderators (MoM!), with responsibility to coalesce the discussion group themes and reflect them back in a plenary session. After all, each participant can attend only one group at a time, so there’s curiosity as to whether other groups thought alike.

This blog is usually devoted to bridging the gap between industry and academia. Therefore, since it affects both theory and application, I’ll share thoughts that emerged about best practices in the area of emotional literacy.

In the programs and the discussion groups, three facets of children’s TV and feelings emerged. The first was programming that sparked an emotional reaction in its viewer (such as love, anger, sadness, pride, or – too seldom – joy and happiness). The second was programming in which the viewer watched a character (real or fictional) undergo a transformation, observing modeling for understanding and managing emotions. The third included shows that explicitly spoke to young audiences on emotional literacy.

In framing our evaluation of programs’ effectiveness in these areas, I brought in Lisa Guernsey’s “Three Cs”:

At PRIX JEUNESSE, we are presented with the content in the form of the programs. It might be working children in Afghanistan, four Dutch boys on the edge of big changes, a Norwegian teen’s first date with added sportscaster play-by-play, or an American sitcom family that moves into a haunted house.

The context involves information about the country, the broadcaster, the time slot, the society’s view of childhood and more. Sometimes it’s obvious and sometimes not; the great benefit of Prix Jeunesse is that we have 400+ people from more than 60 countries, to help explain what we can’t figure out.

We can’t know, though, about the individual child and his/her needs, abilities, interests, and emotional state. Television is a mass medium that children taken very personally. We can’t be responsible for their situation, but must be respectful and thoughtful not to exploit their emotions.

One way of doing this is to make sure to portray a wide range of emotions and coping models, especially for teens, who are going through their own big changes.

Producers should take care not to exploit viewers’ emotions; French artist Jean Cocteau spoke of not using “sentimental blackmail.” Toward what productive end are you displaying strong feelings in your work, or provoking a response within a viewer?

We spoke often about hallmarks that make emotions genuine and believable in children’s TV, and the best advice was to commit fully. We saw a number of characters (in fiction and non-fiction) to whom we were meant to feel close, but the script and structure, or even the camera work and editing, kept the viewer at arm’s length from the character’s inner drama. Delegates appreciated action over dialogue: if your images and sound are good enough, there’s no need to tell children what they’ve also seen and heard.

Research commissioned for the festival looked at what screen elements give young people fear and nightmares, but also what gives them the pleasurable tension and release of “thrill.” We saw plenty of thrill at PRIX JEUNESSE; everyone watches shows simultaneously, and we could hear breaths drawing short, then the sigh of relief.

The research into fear and thrill raised a serious question. Many children described watching totally inappropriate films or shows. More than just educating parents to avoid this, we as content creators and distributors, and researchers and educators, need to keep asking why young people find these shows so appealing and try to give them age-appropriate thrills that stop short of fears.

We greatly admired shows that didn’t “hype” kids’ emotions, but simply opened them to the camera. Norway’s sports competition/reality series “All Round Champion” (winner in Non-Fiction 7-11) – in which kids who excel at one sport compete in others – didn’t need to add over-the-top music, voice-over or editing to generate authentic tension as young teens gathered their courage for platform diving. Dramas like the UK’s “Wolfblood” and Australia’s “Nowhere Boys” were more likely to use (and need) special effects for added excitement, though the British “Operation Ouch” had its desired effect with slightly gory close-ups.

Finally, we discussed the fine line between providing kids with emotional coping strategies and telling them how to think and feel. We too often saw adults coming to the rescue, appreciated it when a show provided tools but not all the answers, and loved it when we watched kids solve their own problems.

The research conducted for PRIX JEUNESSE 2014 will be posted soon at the website of the International Central Institute for Youth and Educational Television (IZI).

Word of the Post: Suitcase – For those who couldn’t come to Munich, the festival might come to you via the Prix Jeunesse Suitcase. I’ll be conducting screenings all over, including the UK’s Children’s Media Conference in Sheffield in early July; at Nickelodeon Studios in Los Angeles in September; and in New York (dates, location TBA). Contact me, or check the website, to see if the Suitcase is coming to your city or country.