French viewers are not accustomed to SVOD and judge current players as too expensive with second-rate content. That may all about to change.

There are currently about 10 subscription video-on-demand platforms in France, and Netflix’s confirmation that it will launch in that market later this year likely has some of them worried.

Canal+, a pay TV network that includes boy-skewing children’s channel Canal J, owns the largest of these SVOD services called CanalPlay, which it recently strengthened by adding new titles to its catalog and diversifying fees.

That’s an example of how Netflix’s much-publicized entry into the French market could be a good thing for the competition, provided other companies can batten down the hatches by improving their content and marketing, like CanalPlay is doing. Because despite a crowded market, French viewers are not very much accustomed to SVOD and still judge such services as expensive, uneasily accessible and with no appealing content. The market has slowly been taking off in the past year, generating US$28 million in revenues, up US$1.2M from 2012, according to figures released last April from analytics and research firms GfK/NPA Conseil.

Emerging SVOD players such as Jook, Videofutur, or Filmo TV may be hoping Netflix’s entry will give an overall boost to the industry.

“The French SVOD market is not a no-man’s land. There are already several local services currently in operation. But there is a gap between Netflix’s publicity ahead of the launch, and how the much-regulated French market works,” says Pascal Lechevallier, VP Business Development Europe iDSCREEN and founder of VOD service TF1 Vision.

Despite Netflix’s marketing prowess, “nothing is won yet,” he says.

“This gives French SVOD operators an occasion to take initiative — to strengthen their content offerings and to make themselves better known among the French audience,” he adds.

Canal+ wouldn’t comment on Netflix’s plans, but a rep states CanalPlay has recruited 100,00 to 150,000 new subscribers over the last year. It now reaches 400,000 customers in total, attracted by a catalogue of 9,000 movies and TV series and its recommendation engine.

Although Netflix will challenge CanalPlay and some of the other players (there are about 50 local video-on-demand services in total), analysts think Netflix won’t necessarily recruit lots of subscribers from Canal+ and premium pay-TV channels. Rather, the company may divert audiences from cable, IPTV and dish TV channels that are sold in a bundle, or movie channels running second-window feature films.

Regarding mainstream broadcast channels, the threat is still unclear, but TF1 and M6 could feel the heat if they broadcast series already available on Netflix. 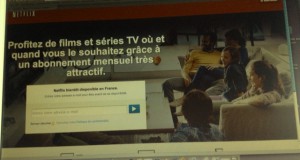 In the meantime, potential users in France can already go to Netflix.com and sign up to receive an email alert when the platform launches, for a fee estimated to be around ?10 per month.

But the platform has not yet confirmed a report this week by daily Le Figaro asserting that Netflix has signed up with a French production company for an original TV series. Reportedly, the action is set to be shot in Marseille.

Although French law requires broadcasters and SVOD headquartered in France to invest a portion of their revenues into local programming, Netflix is based outside of the country and may not have the same obligations. However, another restriction might affect Netflix’s strategy: A movie can’t be made available on SVOD until 36 months after its theatrical release. Undoubtedly, talks with the French government will continue, and also may result in the loosening of this rule.

Netflix’s arrival is also seen as a business opportunity for the telecom market, which recently announced several big-name mergers (Numericable is going to merge with SFR, while Orange and Bouygues are also looking to consolidate).

“When platforms want apps and services using more bandwidth, this shows it is not the end of the story but the beginning,” said Yves Gassot, managing director of research institute Idate, during a press conference introducing figures from its DigiWorld Yearbook 2014 published on Tuesday, just a day before Netflix’s announcement.

Idate forecasts that OTT services will continue to increase while OTT video will maintain a 14.7% growth between 2013 and 2017 to reach 4.2% of market share.

Though Netflix had talks with all French telcos, including Orange, there is no guarantee that a French operator will integrate Netflix into its offering. Idate’s deputy CEO Gilles Fontaine says the telcos would be wise to bring the streaming service on board.

“It would be a clever move for Orange to associate with Netflix,” Idate’s deputy CEO Gilles Fontaine adds. “Within the next 24 months, the French telecom market will hugely consolidate and open a churn period. Adding Netflix to a platform with a good service quality could be a strong business decision.”